Queen's Gambit is a Charles Xavier/Erik Lehnsherr story by kaydeefalls. It is the second part in the "Chessmen" series; the first is called Boden's Mate. Other pairings included are Alex Summers/Hank McCoy and Raven/Angel Salvadore.

Summary: "My name is Nick Fury," he tells Raven. "And I'm here to talk to you about Cain Marko."

The story is a fusion of X-Men: First Class and Inception with a hint of the style of Ocean's 11 set in an alternate universe in which Raven and Alex run their own extraction team. Then Shield comes up with one hell of a job - two marks, simultaneously, and one of them will involve inception. That will require two teams with a total of at least eleven dreamers - a guarantee for trouble.

The story was first posted on October 2nd 2011 on AO3 and is still unfinished. 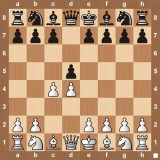 Black can accept the gambit by taking the white pawn on c4 with his own pawn from d5 but white can clear the way for the bishop by replying with 3. e3 and also gives its pawn on d4 a defender. So white is able to gain a center presence and his pawn on d4 threatens to advance. Black will have problems to hold onto its pawn on c4. [2]

Black can also decline the gambit by not advancing to c4 - instead giving his own pawn on d5 a defender by moving another one to e6. [3]

As always, excellent worldbuilding, fascinating psychological landscapes, beautifully complex relationships and backstories. When I found out what happened to Alex's team, I had to actually sit back for a minute and try to wrap my mind around the utter bastardry that is Stryker. And you're actually making me ship Alex and Hank, which I don't normally.[4]

The hints of Marvel background are nice here-The Norsemen reference made me chuckle, as did the Stark bit and the part about Kurt (Possible plot point)? Maybe Stark Industries developed the PASIV? Waiting to see who else might show up from Marvel. And visits from the Inception crew! It's gonna be good. I did like how they're talking about the act of inception now-With Cobb's team, there was almost a sense of desperation, trying to pull off the impossible (Though a good deal of that could be attributed to Cobb himself), while here there's a strong sense of "This will be difficult, but it can be done." It's always easier to do something the second time, and the tone reflects that. Good job. [5]