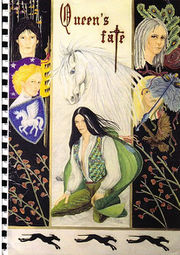 Queen's Fate is a slash 293-page Valdemar novel written by Tessa Rae. It required an age statement to purchase. There were very few issues printed.

The artist of the front cover and the single interior illo is neither thanked nor credited. Assuming they were both created by the same fan, it appears the artist is “Tammy” (perhaps “Tammy Lonas”) as per the signature on the interior illustration.

The main story includes an epilogue that happens seventeen years later, as well as a multi-page “bardic poem.”

The author of the zine is Tessa Rae, but this is never printed formally in the zine, and they are referred to only as “Tessa.”

From an ad in On the Double #28: "This zine is presented with the kind permission of Mercedes Lackey, author and creator of the "Heralds of Valdemar" series. Queen's Fate is a full length adult novel reduced to 300 pages and set in the Heralds of Valdemar universe Coloured and Black & White Artwork. Will be available April 1994. For further information and costs, please send a SAE and 2 IRC's. AGE STATEMENT REQUIRED."

From an ad in Media Monitor and in On the Double: "A novel set in Mercedes Lackey's 'Valdemar Universe,' with her kind permission. If you liked the 'Last Herald Mage' trilogy, this novel is for you."

From an ad in The Monthly: "What if Kris Orthallen was not killed? What if Kris was blessed with a lifebond? And what if this bond was not of his choosing or his liking? What if the bond was male and possessed the Mage Gift? Had ties to a Tayledras Vale? And... has unwittingly invited an evil, hungry darkness into Valdemar? What is Herald Orthallen to do?"

The author of this zine sent a finished manuscript of the work, along with Mercedes Lackey's permission forms, to Lackey to get permission to print it. Lackey gave permission, and the zine is copyrighted under both the author’s name and Lackey's “own publishing company.”

"FATE CANNOT BE REPRINTED, COPIED OR OTHERWISE DUPLICATED WITHOUT PERMISSION OF INKSLINGER'S SOCIETY. ANY COMMENTS OR SUGGESTIONS YOU WISH TO MAKE WOULD BE APPRECIATED. COPYRIGHT (C) 1994, QUEEN'S FATE IS AN AMATEUR FAN PUBLICATION AND IS PRINTED WITH THE KIND PERMISSION OF MERCEDES LACKEY. QUEEN'S FATE IS COVERED BY DUAL COPYRIGHT TO BOTH INKSLINGER'S SOCIETY AND MERCEDES LACKEY. ALL ORIGINAL MATERIAL WITHIN THIS PUBLICATION IS COPYRIGHTED BY THE ARTIST AND AUTHOR."

This is a magic story about magic.

Many times whilst reading through the chapters we would find ourselves in shock or anger hanging off the computer console or trying to get into it to find out as fast as possible what Tessa Rae had done to our favourite characters.

She has brought Valdemar to life for us and for that we thank her profusely.

We also cannot thank Mercedes Lackey enough for giving us such a wonderful universe for Tessa Rae to play in and continue on.... I can still remember the day when Tessa rang to tell me that she had just opened the letter and PERMISSION had been granted by Mercedes. My ears are still ringing from her delighted screams.

This is Tessa Rae's story and is close to her heart, a very personal story which she wants to share. Thank Havens for that!!

Linda has done a magnificent piece of song prose for Queen's Fate. Just wait until you read it.... fair sends shivers up your spine! That lady has a way with words!

Lesley's Lazer printer is still smoking after having to do many, many drafts and when you start out at over 400 pages, this is a monumental task.

Then her computer took a fit when she asked it to change the font down to a slightly smaller type so that we could fit the 410 pages down to just under 300 pages so that we could get a decent postage rate... not an easy task when the Postal Service keeps changing its mind about pricing and NEVER in our favour!

AND let's not forget the photocopier.... Aarrrhh yes.... well it made this strange gasping sound, then started creasing up every sheet of paper, gurgled and burbled and when the smoke and fire cleared there wasn't much left. Tessa did her very very best and just managed to get all the copies done but you may notice a crease or two or three, please bear with us and say a prayer for the valiant photocopier....

Then to top it off Lesley's heavy duty red binder took one look at the massive stack of photocopied pages and fled.... last seen heading west past the black stump! We managed to get it back after much kicking and struggling and lots of obscene words... and that was from the binder. Now Lesley and her helpers think they have tennis (or is it binder's) elbow. Have you ever tried to punch around 300 pages 40 times. Do try it some day.... it is very masochistic!

This is our first story to start off our new Press. What a way to go! After you have read Queen's Fate we know you will expect big things of us and we will try our very best to see that you get them!!

Please feel free to make any favourable comments... we don't listen to any other kind, 'cause we know you won't be able to say anything but good about it... I know we're all prejudiced!

A funny name, but apt. Then again, most would have been pardoned for assuming the red stuff being slung around this last year or so was not exactly ink. And they might have been right.

I have had the honour, for the last 18 months, to have been referred to as Tessa's story editor. That may sound to most to be a very uplifting, even non-stressful occupation, acting as audience-of-one and critic to a talented and creative writer who has pushed the bounds of her art with each epic.

A ritual started very early in the proceedings. Tessa would write a chapter, leave me to read and edit and then the battle would be engaged. Imagine, if you will, a frustrated school ma am type of story editor, raised and taught to see grammar as a tool to be used and refined by a creative but disciplined mind, face to face with a talented and creative writer who feels that grammar is a bloody nuisance devised by conspiring editors to keep free thinking, adventurous writers under heel. We ended up devising a scale of points, allowing each one major win per chapter, as long as I left her "lay's" alone. I didn't.

She changed them back.

It may now sound painful, but I wouldn't have missed it for the world, and the effort even inspired me to provide the bardic poem mentioned in one of the chapters. So blame Tessa.

1. Because I believed it was extremely unfair that the gorgeous Kris Orthallen had to die in the Queen's Own series.
2. Also Kris had been making mutterings in book two about accepting nothing less than a lifebond.
3. And I'd loved the Herald Mage series, and wanted to see a Mage and Magic re-introduced into the land of Valdemar.

(Here I must point out, that this story was conceived and written before the Winds of Fate series was released, and to this day I still have not had the chance to get the books and read them.)

For those who are interested, this story basically starts after book two of the Queen's Own series, but it is not necessary to have read the series to enjoy this novel.

This story has many other reasons for its existence, and if I tried to explain them all, this note would be ten pages long. I just hope the characters enclosed in these pages, explain for themselves why they came into existence, and I hope they give everyone who reads this story as much pleasure as I had writing it.

Now as you all know, the Valdemar Universe belongs to Mercedes Lackey, and I must admit that gave me a few nightmares when I filled out her release forms and sent her a completed copy of this manuscript. Nightmares only because I wanted to share this story with others, but knew ultimately she had the right to refuse me that permission, and in light of how much plagiarism is going on these days, her refusal would have been understandable.

But Mercedes Lackey did nothing like that, instead she wonderfully gave us permission to print this story amateurly and wished us all the best. And not only that, but this story has been placed under copyright by not only us, but also by Mercedes Lackey's own publishing company. So to Mercedes Lackey... Thank you very much.

Thanks also to my tireless little story editor, proof-reader and general dogsbody. Linda, you did a great job, not only reading the first five drafts of this manuscript, but for also feeling inspired to write the bardic song/poem which appears at the end of this novel. (Now you just have to read the final draft, number nine....)

Thanks also to my mother who proved to be a brilliant proof-reader and I'm sorry mum, but Brentan is just not an Arnold Schwartzenegger...

And of course the Lesley, for formatting (wrestling with....) the entire manuscript and printing it! (numerous times...)

To everyone out there reading this, please just enjoy it, and let your imaginations fly…….