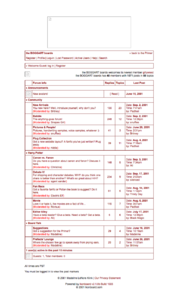 the BOGGART boards, as archived by the Wayback Machine in October 2001. (Images not archived.) 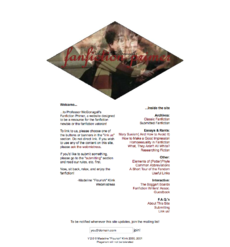 Professor McGonagall's Fanfiction Primer at zosteria.net, as archived by the Wayback Machine in July 2001.

Professor McGonagall's Fanfiction Primer was a Harry Potter fandom resource site originally created by Flourish in 2000 or 2001 and hosted by her personal website. She credits Michela Ecks, Cairnsy, CLS, R.J. Anderson, and Firebolt for helping with the site.[1]

The site had its own message boards called the the BOGGART boards. As of October 2001, the boards had 40 members with 1,071 posts in 88 topics.

The Primer hosted some of the stories on its "Classic Fanfiction" list, including Cassandra Claire's Draco Dormiens and Draco Sinister. As of late June 2001, Flourish was working on creating a separate fanfiction archive for user-submitted fic.[2]

By August 2, 2001, the Primer was incorporated into the newly launched FictionAlley. The original website posted the announcement:

Because of various changes, issues, etc., Prof. McGonagall's Fanfiction Primer has taken up its roots and moved.