Prince Neal Milk Carton was a meme in Once Upon a Time fandom. It shows a picture of Prince Neal Charming on the side of a milk carton, and says that he is missing. This was a humorous way to bring attention to the fact that the infant son of Snow White and Prince Charming had been absent for several episodes in season six, in fact Prince Neal would not be seen on screen for 11 episodes. The meme was well liked on the subreddit and received over 1,100 notes on Tumblr.[1] 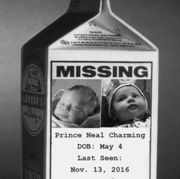