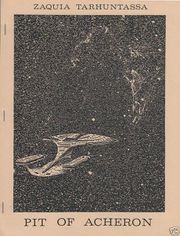 "To Picard it looked like the stuff of nightmares. Grimacing, he watched in stunned silence as it tumbled towards them, the object seeming to wirthe within the grip of the singularity. 'I want a full analysis on that... I want to know if it's from this side.... or somewhere else...'" [1]

En route for shore leave, the Enterprise is diverted to meet the Neerigal, a Starfleet Intelligence vessel. The Neerigal has been investigating a singularity but is not powerful enough to penetrate it without being drawn in; the Enterprise, with more power, will let the Noorigal's crew investigate it more closely. The Neerigal is captained by an old acquaintance of Riker's, a man Riker intensely dislikes. Inside the singularity, they find a wrecked ship, twisted out of easy recognition; Data however uses computer enhancement in a successful attempt to identify it. Meanwhile, Worf, on board the derelict, has vanished... Although the writing is competent and the story well enough developed, I can't help feeling that the writer has been a little ambitious with the theme. Just how accurate the science is I don't know; I'm interested in astronomy, but this is presented at a greater depth than I am acquainted with; however, it reads (to me) like pseudo-science rather than the real thing - and indeed, much of it has to be science at the theoretical level, since nobody in the twentieth century has the technology to penetrate a black hole- This is definitely a zine for the reader who likes hard science in his/her science fiction. [2]