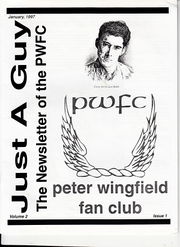 The Peter Wingfield Fan Club was founded in 1996. It had the participation of Peter Wingfield, the actor who portrayed the character Methos in the Highlander franchise.

Its official publication was the newsletter Just a Guy. The club had a chat on AOL on the first Monday of every month, and IRC chats every other weeks.