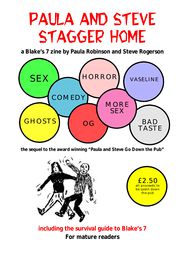 Paula and Steve Stagger Home is a gen, adult het and slash Blake's 7 anthology by Paula Robinson and Steve Rogerson. It is the sequel to Paula and Steve Go Down the Pub. On the cover: "Sex, Comedy, Horror, Vaseline, More Sex, Ghosts, Og, and Bad Taste" and "Including the Survival Guide to Blake's 7" and "All Proceeds to Be Spent Down the Pub."

From the publisher: "This is the second zine of Paula and Steve. Its three year mission to explore strange new worlds, to seek out new horrors and new uses of vaseline, to boldly go beyond boundaries of taste no fanfiction writer has gone before."

Shortly after Redemption '99 Blake's 7 and Babylon 5 convention, Paula and Steve went for a crawl around the pubs in north Bromley near where Paula lives. they are both on the Freedom City (and its predecessor Space City) Blake's 7 email list, which at the time was asking its members for juicy examples of very-purple purple prose. So, on scraps of paper and with the alcohol taking effect, the two wrote a joint story under the simple heading Purple Prose. This was the first of eight stories they wrote, either composed entirely down at the pub, or, for the longer efforts, plotted, planed and divided down at the pub for writing later. These stories were complied together to for the zine zine Paula and Steve Go Down to the Pub, which was launched at Redemption '01, and has since sold out -- all 50 copies.

In that zine, we promised to try to produce enough material over the following two years for a similar slim volume to appear at Redemption '03. And this is it. With luck, we will do the same again for Redemption '05.

To help fund this endeavour, the authors promise that all proceeds from the sale of this zine will be spent down at the pub.

Not suitable for the young, squeamish, prudish, conservative or unimaginative.

WARNING: This review contains spoilers that might interfere with your enjoyment of this zine.

'Paula and Steve Stagger Home' is a follow-up to the inspiring and innovative 'Paula and Steve Go Down the Pub', which saw off all-comers in its category to win a coveted Fan Q award. [1] Since none of my own zines have ever received so much as a single vote for a Fan Q, you can rest assured that the formidability of '...Go Down the Pub' does not lie solely in my own imagination. It was therefore with some trepidation that I purchased '...Stagger Home' (or PSSH), unsure if Paula and Steve could reach the bar they had so adeptly raised in their original sprint through the triple-jump of fan-fiction publishing. I am delighted to say that they have consummately vaulted every hurdle and left no hammer unthrown, inviting the reader to consume the zine in a single marathon session though relays are permissible.

As in GDtP, all of the stories in PSSH were written collaboratively by the authors (Steve Rogerson and Paula Robinson), save two - one by Steve Robinson, the other by Paula Rogerson. These were then subjected to the tight editorial scrutiny of Roger Paulson and Robin Stevenson, before final publication under the non de plume of Paul Svenson Robinrogerer, who has modestly elected to go uncredited. At least, that *might* be what happened, and the editorial doesn't actually deny it as such.

All internal art and cover art is credited to someone called 'Steve', whoever he (or she) might be, and compares very favourably with that in GDtP. 'Steve', however, is more overtly expressionistic in his ilustrative technique, making very economic use of heavy, bold lines that skilfully allude to an almost breathtaking speed of execution, inviting if not openly daring the spectator's reconstruction of the image so rendered with a near-visceral immediacy.

After the editorial (which, incidentally, includes a cunningly self-referential dedication to the previous zine in lyric form, drawing attention to the way Tarrant was underdeveloped as a character - the series considering him primarily in terms of his piloting ability -by comparing him to a brazenly colourful songbird with a penchant for nuts) the zine gets underway with the first story "Getting Your Rocks Off", which contrasts the mutability of canon in the relatively shallow period necessarily implied by exploration of the PWB time-frame against the deeper stability of geological time, the imperceptible processes of which are echoed in the story's title. Where, we are taunted, do faults truly lie? Stratum by stratum, this story - stunning if only for its complete originality - hurtles relentlessly towards its basolithic denouement, though some minor eruptions are implied along the way. Sacred roche moutonnees are overthrown as everyone spontaneously breaks into song. Cannibalism, transvestism, the sexual basis of megalomania and the concept of Blake as a primeval promethean paragon of political paradox march towards us over an ever-encroaching horizon as didactic drumlins of diachronicity. Jungian archetypes are awoken, almost prompting us to see the role of Servalan fall to Tim Curry with Richard O'Brien as Travis, whilst Jenna acquires a quasi-Dickensian quality in this old curiosity shop of rocky horrors. All in all, it's pretty good.

Even longer is the elliptically titled "Mary Sue", a gentle parody of this much-maligned subgenre of fanfic. This is a story about the fulfilment of dreams, where not all is not as it might not at first appear. Its evocation of wistful nostalgia is matchless, as it weaves a tapestry of stunning sophistication in its bold quest to redefine the definitive definition of the indefinite. In their tentative recherches of their own tempues perdes, the crew of Liberator confront their naked selves through the inadvertent intervention of two fellow travellers, who are - within the context of the narrative's surrogate verisimilitude - named as 'Steve Rogerson' and 'Paula Robinson'. We can immediately suspect that these names were not chosen at random, for surely the common 'son' ending of their names is an overt pun on 'sun' that betrays their solar, even celestial nature. They are seraphim, elohim, angelic beings of concealed majesty, Oberon and Titania all rolled into one. But who, you might ask, is Puck? Who indeed? The short answer is, There isn't one, because this story is a parable and its theme is respect - respect for authors, characters and above all readers. It is, if anything, remorselessly inoffensive, almost overflowing with references to taste. At one point it deliberately ties itself down, overtly denying itself a freedom it knows it might otherwise abuse. Within the space of 16 pages, life meets death, love meets lust, beauty meets brains, in an unfolding flower of fable where the anthers of allusion barely threaten to pollinate the stigma of stile.

"Soolin Learns Her Trade" is, regrettably, less satisfying. This might have been a skilful psychological portrait of a woman completely unconnected to everyday mundane life as it is lived today, whose every thought reverberates down the gulf of future time, blinding us with the complex harmonics pouring through the primal orifice of Bertolt and Brecht's Gefremmed Shaft. Reconfigured as a timeless quest for solitude on a Spanish beach, it fails largely through the unconvincing depiction of two young men, misunderstood drifters who can only evoke Becket in their alienated temptation of martyrdom. No one in reality is remotely like either of this pair, and the story serves mainly as a warning to the perils of of an overactive authorial imagination.

"The Conference", by contrast, is a tour de france. Sole credit for this minor masterpiece goes only to Steve Rogerson alone, and the end result is unique, redefining the concept of romance. Although written primarily for Jarriere fans (with whom this story will surely elicit a response almost as intense as that experienced by their hero in this story), Rogerson has thrown caution to the wings by introducing Og. This is, not, however, mere innovation for innovation's sake, for the story remains firmly within the confines of canon, and cannot help but tempt us to ponder if there are indeed any limits to Mr Rogerson's legendary ingenuity. Jarriere and Og, Beauty and the Beast, Quasimodo and Esmerelda, entwined here within fan fiction's Notre Dam, the cathedral of hurt/comfort. It is, surely, a match made in heaven, where nothing is off-side and no obstructions hinder the movement of the posts that mark the mouth of the goal of true love. And all without recourse to the trite trappings of Cartlandesque convention. For those privileged to read it first on Freedom City, it surely made Christmas quite unforgettable.

There are, of course, some other shorter stories, and an innovative choice of additional material that lends variety to the zine as a whole and displays the breadth - as opposed to the depth - of the combined talent of the authors. A number of poems are scattered throughout the zine, all of them composed in a traditional Irish form of the scheme A-A-b-b-A, and the final two examples constitute the authors' touching tributes to each other. There is a particularly challenging crossword, and a daunting general knowledge quiz about Og. Merely perusing the questions suggests that rewatching Animals might be amply repaid.

That, then, is "Paula and Steve Stagger Home", a zine that stands out proudly from the crowd, shouting aloud, quite uncowed, defying the dowdy limits of the disallowed. Which rears the question: Should you buy it? Not if you've already got one. [2]