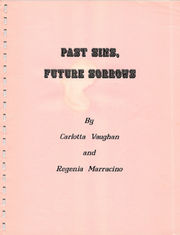 Past Sins, Future Sorrows is a gen 70-page Simon and Simon novel by Carlotta Vaughan and Regenia Marracino.

From Media Monitor: "Amanda McKay (from the episode "The List") has come back -- free at last to build a future with A.J. Or is she? Not an AU."

Copyright—December, 1988. PAST SINS, FUTURE SORROWS is a non-profit, amateur publication put out by The Squiggle Press and is not intended to infringe upon the rights of Universal Studios, MCA, or any other holder of SIMON & SIMON copyrights. All rights reserved by the authors. Any reprints or reproduction of this material without the express written consent of the authors will result in the instant self-destruction of the zine. Clone at your own risk! Hee, hee.

"...Before he could examine his action, he threw open one of the doors and stared out into the swirling fog. Just like when...Amanda appeared...all shrouded in mist and mystery. A lump formed in his throat, and he swallowed hard, bowing his head as he backed up to close the door.//"AJ?//He froze. Oh, God! Now I'a starting to hear her! Next, I guess I'll see her coming toward me out of the fog. At that, he jerked his head up, inhaling sharply as his thought became reality, and for amoment, he stared at the vision which materialized out of the mist, then backed up a step."

One of the best things to come out of S&S fandom is my friendship with Carlotta. If ever two people were the same and yet totally dissimilar, it's Carlotta and I. Our minds function totally different...hers is SOOOOOO organized! Mine is utter chaos. Yet time and again, we wind up with the same answer or thought or... whatever. We con5>lement each other. We are a bit like the Simon brothers in that respect...I'm a 'Rick' to her 'AJ'. This could be why our writing meshes so well. (Not to mention that we edit our damn stories to death!) I often have to study a part to remember if I wrote it or she did.

The idea for PAST SINS, FUTURE SORROWS came from Carlotta's fertile brain. (She has some wonderful ideas!) But then we had a problem. We discussed this baby so much and so thoroughly, it seemed like it was already written! (We do the same thing with others, and I asked her the other day for a story that's only in her head! *Sigh*) Anyway, I gave up on her ever getting around to writing PSFS, so without her permission, I started it. (I was going NUTS wanting to see it in print!) Thankfully, she didn't mind. (It is lucky that our writing/thought processes are so similar; otherwise, I'd never be able to put down in print what she has in mind!)

PSFS is also part of the reason ECHOES OF TERROR, III is running behind schedule. We had more of PSFS done and wanted to get you at least one story to read... Not to mention that we've put in way too much research to rush EOT3 just to get it out before the end of the year. We had a fantastic response to E0T2--except the fact that it was continued, of course. Our excuse for that is that by then we'd found we were hip-deep and sinkin' fast. We needed to do lots of research to do the story justice, so...those hated words appeared at the 'not end' of EOT2. [AND THANKS TO ALL OF YOU GREAT FANS WHO VOTED FOR EOT2, THUS ENABLING US TO WIN THE FAN Q AWARD!!]

Goes without sayin' that we never coulda done any of this without AJ and Rick, those who created them...and, of course, JP and Mackie, who breathed life into them and who give us such pleasure in...watching!

Thanks to our friends for egging us on and thank you. for being so patient and understanding. We hope you enjoy this zine. Comments — good or bad — are welcome.