Out of the Big Black 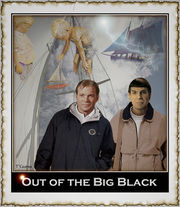 Out of the Big Black is a 104-page K/S slash novel by Rae Trail. It has the sub-title, "A Series of Stories by Rae Trail." The cover and interior art is by T'Guess. The series is a crossover with Star Trek: The Next Generation. Four of the five stories were previously net-published, one was only published in this zine.

Kirk at the helm of a sailing ship has always presented an intriguing picture for me so it wasn’t much of a leap from that possibility to the stories in this zine. I’m not a huge fan of AU, and I don’t suppose this fits the category anyway...this is simply an alternate timeline following Kirk’s disappearance into the Nexus. It’s a good one, a skillfully written and interesting story, which held my attention well.

The characters are pretty much on target, which can be difficult when they are pulled from their normal environment. I even enjoyed the inclusion of Picard and Q from TNG because this was the only series other than TOS that I’ve watched in its entirety. I’m not sure the timeline is accurate but I don’t get excited about things like that when I’m reading a good story. The closest I’ve been to a sailing ship is a painting in my grandmother’s living room, but the details of masts and rigging and so forth added to this seafaring yarn’s believability for me. That Kirk and Spock chose to spend the remainder of their lives in cetacean research and sailing the high seas is a reasonable idea and one that lent just the proper air of adventure. These men aren’t cut out to be beachcombers and just lay back in the sun waiting for old age to sneak up on them. They meet life head-on in Rae’s companion stories, just as they did on board the Enterprise. An unusual twist, and one that normally completely turns me off, is that they have chosen to have a family. On board the Cloud-Dancer with them are two precocious boys – twins who were conceived and nurtured in a laboratory. Perhaps it is the fact they are almost miniature adults because of their intelligence and personalities that I can fathom the idea of Kirk and Spock as parents. It is to the author’s credit that I was not totally put off by the whole concept. The challenges they face in raising the boys, completing their work and riding out a hurricane are all part of the adventure of this zine. I enjoyed it so much it could have gone one for several more chapters and I would not have been disappointed. A job well done, Rae.

Not to be forgotten is the artwork throughout the zine by the incomparable T’Guess. I’ve admired her work for years on the net, and it’s nice to see it gracing the pages of a zine. Kirk & Spock look so natural on the cover in their civilian attire. And the background prepares you for what waits inside. And inside are where you find the nudes for which T’Guess is so gifted. The first is very different: an arrangement of stars showing Kirk and Spock in an intimate pose. Now wouldn’t that be something in the night sky?!

I love the relaxed manner they exhibit in the pose surrounded by tropical plants. So realistic! And the one of them standing in the water, so eager for each other (I believe this was used on the net in an applet, which was mesmerizing). It still is. Then, the “snapshot” of them standing beneath the sails, looking to the sky contributes so much to the feeling of the story. Finally: Embrace. T’Guess is masterful at capturing them in this type of pose and leaving no doubt in your mind that these men are devoted to each other. [3]

Out of the Big Black is a crossover with Star Trek TNG, featuring Picard and his lover, Q. Set a hundred years after Captain Kirk disappears into the Nexus, the story takes place after the events in the movie Generations (which the author freely admits to hating). Q finds Kirk asleep in a pod, having regressed to the age he was when he took command of the Enterprise. Fearing a trick by the Continuum, the Federation dispatches Ambassador Spock to verify the Kirk that Picard has found is his bondmate.

The story details Kirk's awakening in the new time, his difficulties in understanding the new technology, wondering what place he could possibly have in this 'new world', and more than anything, fearing his meeting with Spock. There are some lighter moments, too, such as Kirk's reaction to Worf, and his delicate questions to Dr. Crusher to find out to what extent people are monitored in their quarters, afraid that if he jerks off, she'll know! This story does come with a 'caveat lector': Spock on becoming reacquainted with his bondmate goes unexpectedly into spontaneous pon farr, and the author doesn't pull any punches in how brutal the encounter is. That scene is not for the faint-hearted or squeamish. I found it wasn't necessary to know anything about TNG to appreciate this story. The narrative moves nicely, the dialogue is sharp, and I thought the characterisations particularly of Kirk, Spock and Picard were strong and three-dimensional. It was interesting to see Kirk, for once out of his depth and feeling very insecure about his connection with Spock after a century apart.

The story comes with four more sequels which Rae promises she'll be posting on the K/S Archive in the coming months. Having seen the calibre of her writing I, for one, can't wait for more! [4]