Other Times, Other Affairs 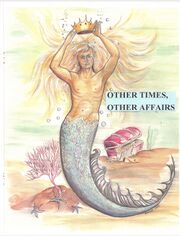 cover -- "The cover, by Rudas, Illya as a merman, was inspired by "The Unexpurgated Journal of 'Shipwreck' Nolan," by Paula Smith.. Illya as a merman?? I told you, sometimes they are reincarnated as other species. Four-fingered hands, fishy tail, yet still definitely Illya, with pale gold hair billowing out in the blue green sea. Rudas, more than any other fan artist I know, has a gift for incorporating fantasy yet capturing the essence of the character. The painting is a fantastical piece in an underwater wonderland abundantly accented with jewels and starfishes." -- [1]

Other Times, Other Affairs is a gen and slash AU 98-page Man from UNCLE anthology. The merman art was incorrectly credited on early editions; and was corrected in later issues.

Six years ago, Paula Smith let me read two stories she had tucked away. These stories, one gen, one slash, were beautifully written, but for a long time they had no home. Past lives stories are scarce; Only a handful of fan fiction writers are interested in writing this type of story. It requires a lot of research to establish a historical setting.

Characterization is also a challenge when writing this type of story. The writer usually gives the characters other names, some not even close to "Napoleon Solo" and "Illya Kuryakin," yet when successful, the reader immediately recognizes the characters in their alternate realities. Generally the characters have a recognizable appearance; It is almost universal that Illya has to have blond hair and blue eyes. Yet it can get tricky when the author reincarnates one of the characters as a different species or gender. Yet somehow a good writer will make our favorite characters recognizable in their various incarnations. I found this to be the case in this publication. I attribute this to the skill of the writers and the diligence of the editor. Other Times, Other Affairs takes the daring step of combining gen stories in the same volume as slash. The cover, by Rudas, Illya as a merman, was inspired by "The Unexpurgated Journal of 'Shipwreck' Nolan," by Paula Smith.. Illya as a merman?? I told you, sometimes they are reincarnated as other species. Four-fingered hands, fishy tail, yet still definitely Illya, with pale gold hair billowing out in the blue green sea. Rudas, more than any other fan artist I know, has a gift for incorporating fantasy yet capturing the essence of the character. The painting is a fantastical piece in an underwater wonderland abundantly accented with jewels and starfishes. By the way, I am NOT Rudas. Carol Lynn, who does the layout for Boojums Press inadvertently credited me as the cover artist (Thanks, Carol, but I didn't do it. Just wish I had!) This mistake has been corrected in the reprint and revised title page. Now, on to the stories.

Protector-of-Horus-in-the-Nest by J. E. Bowman: J. E. Bowman wrote three stories for OTOA. Bowman has a wonderful talent for immersing herself into historical and foreign settings. Obviously she does her homework. Her stories are laced with details; historical figures weave in and out of her character's lives. In "Protector-of-Horus-in-the-Nest," she writes a framing story set in the current day (well, 1960s). Napoleon and Illya are in Egypt, following some THRUSH baddies into the Valley of the Kings, Napoleon fells and is knocked out and thrown into the persona of Napal-Min, an officer oft he Pharaoh Amenhotep's troops. Shortly thereafter, his men capture Ilyakhet, who was sent to spy on the Egyptians by the Hittites. In very little time Napal-Min enlists Ilyakhat to work toward the goal of protecting Nefertitti and her children, the heirs to the throne. This is a lively adventure story. Bowman has a gift for creating settings the reader can easily visualize which is particularly useful for this type of story. Her characterizations ofNapoleon and Illya and even some secondary characters in their alternate personas, are very recognizable.

Service and Servitude by Hephaiston/Fara Y. Driver: Hephaiston sets our favorite characters in Nero's Rome. Neopolus is the Emperor's cousin, the son of Alexius Claudius. Ilia appears to be one of Nero's slaves, a station in life that affords much opportunity for suffering. For those who are hurt/comfort afficionados, Hephaiston/Driver is arguably the master of the genre and this past life setting gives her a vehicle to display her art. The story has many of the features I like in Fara's writing: h/c, a close relationship between the characters, and strong secondary characters. The story also highlights a quality that I value in U.N.C.L.E. stories, that is, the nobility of the characters. In current day (1960s) U.N.C.L.E., the cause is generally to save the world from the evilness of Thrush; in "Service and Servitude," Fara utilized the evil of Nero, whose well-documented antics could easily rival the insanity of a third season Thrush villain. Fara generally uses the pseudonym, Hephaiston for her slash stories and F. Y. Driver for gen stories. Using both names, her fans will enter the story not knowing which way she will decide to go with the story in a zine which offers both genres.

Brother Solus, Sister Ilene by Paula Smith: When you inhabit other bodies in past lives, there are no certainties, including gender. In a previous past life story ("Dear Friends," in Karma Concurrence 2), Paula reincarnated Napoleon as a woman. In this story which she wrote for her own zine, Illya ends up in the female incarnation. The story is set in the time of the inquisition and Napoleon is in the role of a monk. As Brother Solus, he finds himself with the task of investigating Sister Ilene, a white witch. Brother Solus has taken a vow of chastity, but with the same inclinations we have seen in his 1960s incarnation, he has a hard time fighting his nature. Adding the lovely Sister Ilene to the mix makes this a most ironic set of circumstances.

The De Medici Affair by J. E. Bowman: Solon de Napoli and Iliescu of Kiev, an apprentice of Leonardo Da Vinci, cross paths in 15th century Florence in an adventure that lands the two of them smack in the middle of a plot involving the de Borgias and De Medicis. Lots of action and humor.

The Unexpurgated Journal of "Shipwreck" Nolan by Paula Smith: This story is presented as a series of journal entries by Samuel Jacob Nolan, an 18th century version of Napoleon Solo. Nolan, a sailor, is the sole survivor of a shipwreck. Injured, near death, he is washed up on a desert island. In this adventure Solo encounters the strangest version of Illya yet... a merman. Man and Merman, being isolated from their own kind, they turn to each other for survival and companionship. Paula's careful use of language and consistent attention to detail, give this "tall tale" a feel of reality which makes the story extremely involving. The story, which is slash, is bittersweet.

A Revolutionary Affair by Deb: Slash readers will find "The Revolutionary Affair" to be the most familiar story in the zine. Deb has demonstrated a gift for creating a sense of place in many of her other stories; it didn't surprise me at all that she could utilize this skill for a story in a historical setting.The cast retains heir names in this story and their roles are similar to that of their 1960s counterparts. Colonel Alexander Waverly is the head of the intelligence branch of the newly formed Continental Army. Napoleon, the Right Honorable Lord Solo, his best operative doesn't want a partner, but he agrees to accept Monsieur Illya Kuryakin, a former noble from the Russian court. The agents find themselves investigating a rash of deaths calculated to hasten a war between England and the Colonies. The appearance of Lady Angelique DuChien is a lively note in this intriguing story.

Hope and Honor by J. E. Bowman: In "Hope and Honor," the issues are not clear-cut, and it is the exploration of values which is the major focus of this story. Prior to the American Civil War, Nathaniel Sullivan, a Northerner, and Elijah Kershaw, a Southerner, meet at school and become close friends. Early in the story there is a brilliantly written scene which takes place during one of their class discussions bout the concepts of duty, honor, integrity and country. The discussion foreshadows later circumstances where Sullivan and Kershaw find themselves serving in opposing armies during the war.

Reading this, the last story in the zine brought home to me that a major theme of this anthology is the pervasive values that the characters carry with them in all of their incarnations. Whether they are fighting for the future of Egypt, the Roman Empire, or the independence of the United States of America, they always have a higher mission and though they do not carry the gold ID, they are U.N.C.L.E. agents in spirit. [2]