Ordeal by Consent is a Kirk/Spock story by Ciana Mitchell. 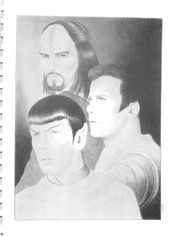 the inside back cover, art by Chris Soto for "Trial by Ordeal" -- "The inside back cover goes with the story "Ordeal by Consent" by Ciana Mitchell. It shows them after ST:TMP along with a new character named Khylar. This is an interesting picture with all three people looking in different directions. It means nothing until you read the story." [1]

It was published in the print zine First Time #31. 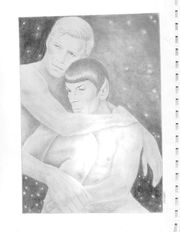 "The back cover, which I like best, shows them holding each other against a background of stars. Here, both are looking off into space obviously (to me) not seeing anything but their own thoughts or perhaps they are just enjoying the wonder of each other. The faces are great, very expressive." [2] Another fan writes: "The back cover is gorgeous also. Their expressions are dreamy and thoughtful and I love the positioning  of the bodies. The starry background completes the mood and is perfect for these two star travelers. Two of my favorites of Soto's consistently fine work." [3]

"Kirk and Spock are taken prisoner by a Klingon bird-of-prey after being forced down on a small planet, where Kirk uses his body to trade for medical help for Spock who was injured in the crash."

"The shuttle plowed through the galactic seas. Stars shone like precious gems and nebulas splashed brilliant colors on the black void. A pair of brown eyes studied the beauty. With a pang of sorrow, their owner mused that only a short time before he might never have had the chance to see these wonders again. A presence behind him brought to mind a weary traveler finally come home; again warming his body by the hearth-fire of that familiar aura. It was good to be home again."

This is a 30-page story which could easily have been fifty pages. There's plenty of opportunity to show in detail scenes which are only hinted at during the story and then later briefly mentioned. Since these scenes would be sexual ones, I am sorry that the writer didn't develop these. However, I think I know why these scenes were not included. Mitchell is trying to emphasize the love between Kirk and Spock. Also, she wants to downplay the involvement of Kirk and the Klingon, Khylar. Plus, this fits with a main plot point which is given away by the title. I dislike titles this revealing! The story is very good. It shows an attitude of Kirk's that I think is very believable. He will do anything for his Vulcan and not regret it. He's not going to have nightaares or need therapy. He knew what had to be done, did it, and that's it. Of course, I do get the impression that it wasn't all that terrible an ordeal for Kirk. But, that's just my dirty mind overworking itself? Or maybe that's another arguaent for including the missing scenes???? (The first one is that I'd love to "see" what happens because I love graphic sex scenes.) Since we don't get to "see" the "ordeal", it's easy to wonder just how awful it was for Kirk. Perhaps a solution to the writer's not wanting to emphasize this and my prurient interests is to have more of Khylar's personal log given in detail. This would develop both Kirk and Khylar more. There are some interesting and good lines in this story. Khylar's comment "I am glad you live" is intriguing and, need I say it again, makes me wish the story were longer. Spock's best line for me was "I have always thought you a man of exquisite taste." Kirk has some great lines, my favorites being "But... I learn very quickly" and "[It's] A part of human nature you should study more." [4]

It was very hard deciding which of this author's stories to comment on because I love all her work so much. My only quibble would be with its quantity. There's not enough! In "Ordeal" Spock and Kirk are captured by Romulans after a crash landing that leves Spock badly injured. The entire story is told from Spock and the romulan point of view. It makes no difference because Kirk's actions tell us all we need to know about his feelings. The Romulan commander becomes fascinated by Kirk (can't blame him) but indifferent to Spock, to the point of letting him die of his injuries. Kirk uses that interest to get help for Spock. We never see what he does which makes it more effective. Rescue comes in the knick of time and the pair coninue their lives, until Spock accidentally finds out exactly why he got the blankets, etc, that kept him alive. The moment that he makes the connection was very poignant and his confrontation with Kirk very sweet and deep with emotion and committment. It was a fulfilling story on all counts and I hope for more soon. [5]

From the first descriptive paragraph, this one gripped me. Before I had any idea of the content, the quality was plain. “The shuttle plowed through the galactic seas.” And the pilot, “...warming his by the hearthfire of that familiar aura.” Perfect.

Timing is perfection, too. Consideration voiced becomes the prelude to a long overdue confession. Then, an ion storm intervenes, followed by the decloaking of a Klingon ship. Maybe, like me, some of you haven’t yet had the privilege of reading this wonderful prize. For that reason, I’ll try not to take you along for the plot, just some of the gems along the way. They are many and varied. The dialog is—well, it couldn’t be better—superb is a word that fits. “...where you are...that is home.” Spock shares, followed by Kirk’s confessed “I love you. God, how I love you.” He’d wondered how to say it. How better? Such simple words, yet so impassioned by this writer’s skill. The setting for these words you must read for yourself. This is a very strong and wily Kirk. One that never loses the edge that has taken him to the Admiralty. I like when that strength shows through any trial of wills. After all, this is a man even the Klingons are forced to admire! Oh, I love the way Kirk meets his enemy head on. No cowardice here. No fear revealed. Perhaps no fear even felt for himself. A wise tactician using whatever means available to achieve victory. This is difficult to convey effectively but it’s done superbly here. As Kirk himself thinks, “I don’t like to lose. And these stakes are the highest I’ve ever played for.” You might be able to guess the stakes, but you would be hard pressed to predict the strength of character that comes shining through as Kirk plays his hand. Even the Klingon, trying to convince himself of the weakness and contemptibility of humans ends up thinking instead that Kirk, at least, is intriguing, proud, provocative. And I agree he has never been more so.

It’s great to see both men face overwhelming odds without losing one ounce of what makes them the powerful commanders they are. Compassion, that oft unrecognized leadership quality, is the final proof of who and what James T. Kirk is and will always be. Super reading. [6]

This wonderful story shows just how far Kirk will go and how much he will sacrifice to save Spock. It’s three months after the V’Ger crisis, and Kirk and Spock are in a shuttle on their way to attend an awards ceremony for Sarek. As they finally begin to speak of the feelings between them, a rapid sequence of events interrupts the intimate moment. An ion storm means a course change, a Klingon Bird of Prey attacks them, they crash land, Spock is badly injured, and they are captured by Klingons. After a brief interrogation, they are shown to a cell, and Kirk learns that thanks to Spock’s encounter with V’Ger his telepathic abilities were damaged and are slowly recovering. Spock can’t yet mind meld or go into a healing trance. Spock and Kirk finally express their love for each other before Kirk is taken alone to see the Klingon Commander, Khylar. Khylar forces Kirk to talk with him and eat with him, in exchange for his doctor looking at Spock. However, Khylar refuses to allow the doctor to treat Spock, and continues a cat and mouse game with Kirk over several meetings where he alternately threatens Spock, threatens Kirk, and studies Kirk while doing it. Kirk is making his own study of the Klingon, and realizes what he must do to help Spock:

“There was something in the Klingon’s eyes that puzzled the human. Then recognition slowly dawned. Bones had once teased him about his ‘knock ‘um dead’ lover-boy reputation. Swearing Kirk could even charm the pants off a Klingon if he set his mind to it. It came to him then, a way to exploit what he recognized in the Klingon’s eyes and with it a way to safeguard what he held dear. An idea quickly formulated and a snap decision was made.” Khylar pretends disinterest when Kirk first proposes the plan, but Kirk can clearly see that he is intrigued by Kirk and by the idea of Kirk as a willing bedmate, especially when he learns Kirk is virgin with men. So it is agreed, and then Spock gets medical treatment, and is moved to a much more comfortable cell with heat, a mattress, blankets, and plenty of food. Ciana sometimes includes little tidbits of Vulcan culture in her stories that I very much like. In “One Tin Soldier” it was a pre-Reform ritual used by Spock in which a warrior vowed undying love and loyalty to their Chosen one. In this one, Spock recites part of a pre- Reform poem, as he urges Kirk to make love to him: “Like the dawnfire breaking over Seleya, thee chases away the shadows of night.” A fragment of pre-Reform poetry came to Spock’s mind. “Thou art beautiful and brave, and the thread of our lives is so uncertain. Come share my bed, let me fill thee with my love...for tomorrow I may die in battle.”

Eventually the Enterprise rescues Kirk and Spock, although Khylar escapes. Kirk had intended for Spock never to learn of what happened between him and Khylar, but Spock finds out while attempting to decode several of Khylar’s message tapes that escaped the destruction of his base. There’s some lovely scenes between Kirk and Spock as Spock truly realizes the depth of Kirk’s love for him when he discovers the sacrifice Kirk made, and also a really wonderful love scene. The reappearance of Khylar provides closure to the story, with a bit of an unexpected ending. This story is another favorite of mine, with its interesting plot, and such a wonderful portrayal of the profound, overwhelming, intense love between Kirk and Spock. [7]