Once Upon a Time... (Prisoner zine)

From Fanlore
(Redirected from Once Upon a Time (Prisoner zine))
Jump to: navigation, search

Once Upon a Time... is a gen British The Prisoner (TV series) newsletter with articles, art, and fiction. It has at least forty-four issues.

The newsletter was published by the fan club Once Upon a Time.... It was available in the UK by Bill Sherren in Kent, England, and in the US by David Lawrence in South Carolina. Someone named Jane Nicole may have also been involved in production.

This publication has a sister zine called The Prisoner which was published by an "American Agent."

From Datazine #3: "We include articles, stories, comments on all aspects of the series and related topics. In particular, we feature exclusive interviews with actors and writers involved in the show; information on Portmeirion, where The Prisoner was filmed, features on Patrick McGoohan and more."

From For Your Information #5: "The longest running zine for the British 60's series THE PRISONER, Subscription also includes; a guide and a cast list, a map of the Village, a copy of THE TALLY HO, and use of the FREE Village Library containing sore than 100 books, articles, newsletters on THE PRISONER. WHICH SIDE ARE YOU ON? For information send SASE." 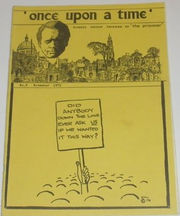 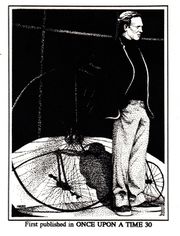 Once Upon a Time 31 was published sometime before December 1990.