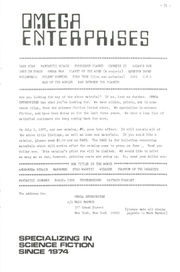 Are you looking for any of the above material? If so, look no further. OMEGA ENTERPRISES has what you're looking for. We have slides, prints, and in some cases clips, from the science fiction listed above. We specialize in science fiction, and have been doing so for the last three years. We have a long list of satisfied customers who keep coming back for more.

On July 1, 1977, our new catalog, #6, goes into effect. It will contain all of the above title listings, as well as some new materials. If you you'd like a catalog, please send $1.00 and an SASE. The SASE is for bulletins concerning materials which will arrive after the catalog goes to press on June 1. Send you[r] dollar now. This catalog's print run will be limited. WE would like to print as many as we can, however, printing costs are going up. So, send your dollar now.