Nox et Lumos was a Harry Potter mailing list and archive "devoted entirely to relations between JK Rowling's Malfoys."[3] It was primarily Malfoycest, but also allowed other Malfoy-related fanfiction, regardless of pairing or rating.

The nox_et_lumos Yahoo! Groups mailing list was started April 14, 2002. As of 2014, it is inaccessible except to members.

While still public, the group's description was cryptic, not stating outright that the group was primarily for Malfoycest. The description read:[4]

Devoted to adult fiction - Gen, Slash, Het... All types are welcome here, as are all pairings from the HP-verse, but this group is devoted primarily to L/D, L/N, and N/D pairings!

Yes folks you heard right and you know exactly what that means. We're all about bringing a new meaning to family ties!

Hosting fic, art, challenges and games here and on our website, we're a friendly bunch and we'd love to meet you, but just be aware we're not shy about our subject matter.

"Too polite to be religious; too witty to be learned; too youthful to be serious; and too handsome to be discreet."

One list member wrote in July 2002: "The best discussions [of Slytherins] are on Nox et Lumos; the other lists I'm on are overly fluffy (you have to tolerate a lot of teenage girls sighing over Tom Felton [...]) [...] However, while Nox et Lumos (a list originally devoted to discussing what the Malfoys get up to when they're all alone at home and JKR isn't looking) is the most active and serious Slytherin list, it's also the most perverse. If you squick easily, you might not like it. Slytherin philosophy occurs there intermittently-- along with discussions of character motivations and discussion of why certain dark types of sexual fantasy appeal to people. And a continuing debate as to whether Lucius/Severus is a good pairing @_@;;;"[5] 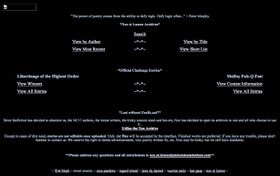 The Nox et Lumos Archives, as captured by the Wayback Machine on November 22, 2002.

In response to FanFiction.Net's ban of NC-17 material, the Nox et Lumos archive amended its policies to permit a broader type of fanfiction: "Since fanfiction[.net] has decided to abandon us, the NC17 authors, the incest writers, the kinky noncon slash and het-ers, Nox has decided to open its archives to one and all who choose to use it..."[6] The site's challenges continued to be primarily for Malfoycest.

The archive was part of the Potterfic Alliance.