Not my hair it is a palm

not my hair it is a palm is a popular funny Tumblr blog dedicated to British actor Tom Hardy, of Inception and The Dark Knight Rises fame. The tagline is "This is a blog about Tom Hardy, palms and mystery. Official blog of TomHardyParty.com" (21 Nov 2011). 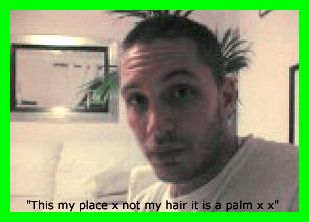 The title is taken from a pic Tom posted of himself in his flat with a housepalm behind his head entitled "This is my place x not my hair it is a palm xx." The original focus of the tumblr was the many pictures and videos of Tom Hardy with palms and other things on or near his head. Since then the site has evolved to cover news and updates on Tom's latest projects and whereabouts, often linking to content on Tom Hardy Party.com, a large fansite co-run by the tumblr owner.

It’s been exactly one year since I started this blog. Some of you still have questions. Let’s recap with a bedtime story:


Once upon a time there was a handsome prince with a magical mobile phone who took copious photos of himself and put them on his Myspace profile x his palace was filled with palms, exotic palms from far-away lands x One day, the prince realized that in a photo that he had taken of himself the palm tree behind his head might be mistaken for being his actual hair x he captioned the photo "This is my place x not my hair it is a palm xx" for he was brave and kind and did not want anyone to be confused x And there was peace in the kingdom and he continued to post pictures of himself for the peasant women to fap to x until his evil /handler/publicist/agent put the prince in a dungeon and forced him to delete his myspace profile xx

x and the kingdom was shrouded in darkness…. xx

UNTIL a magical party palace known as TomHardyPardy.com was built, so that all may view the photos and REJOICE for they belong in a museum and should be seen by all xx

I seriously cannot believe it’s been a year, you guys! My fronds are tingling with love for you all. I started this as a joke, because his caption made me laugh my ass off. NOW IT IS SO SERIOUS THOUGH. WHY ARE THERE ALWAYS PALMS BEHIND HIS HEAD?! IS HE REAL?! SO MANY QUESTIONS REMAIN UNANSWERED. We must keep going. Those of you that have sent in stuff have really made it that much more fun and awesome and I can’t even tell you how much I’ve laughed! I wish I could reblog everything ever sent in but yeah, that would take a while.