The No-Homo Intern is a fan-created meta character in the Supernatural fandom. Typically, the intern appears as a caricature of showrunner Jeremy Carver dressed in various disguises in order to conceal his identity in the writer's room. His mission is to further the Destiel agenda by acting as a double agent.

After Season 10, Episode 10 'The Hunter Games', many fans on Tumblr were amused by the angel Castiel's admission that he could respond to feelings of longing as well as formal prayers. [1] This created a retcon on the show which explained how Castiel was constantly at Dean Winchester's side (his longing). Many slash fans speculated that the show's writers were unaware of the obvious Destiel-heavy implications of this change in the show's mythology.

"...I mean at the very least they’re just being clumsy and no one is thinking carefully about not writing Destiel-related stuff. There’s no confused intern sitting in on the writer’s room who’s literally just there to say, “Uhh that sounds kinda gay…” :P"[2]

"You just launched this extended fantasy in my head, whereby there is in intern—an intern whose entire job it is to try to Defuse Destiel. My fantasy intern was hired sometime after the 9x03 twitter debacle. The job tasks were twofold:

- Figure out what input the “crazy Destiel fans” were latching on to.

The thing is, the intern soon figured out (after failing to protect 9x09), the Destiel scene was a unique beast. The higher ups seemed to think it was all about hormones and “eye sex”—something that could be solved by throwing in a few ladies—but the astute intern realized the issue was more intricate than that. There was a substance to the Destiel madness—one that no simple lady sticker was going to be able to contain. The intern then decided that this task was going to take advanced knowledge. She or he dug deeper: into the headcanons; into the metas; into the group narrative... into the tumblr. But what the intern hadn’t accounted for was that the madness... was contagious. Destilence. 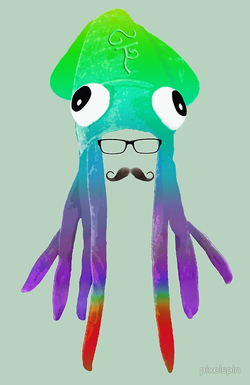 The No-Homo Intern in its current iteration[4]. The tulpa symbol on the squid hat references Supernatural's canon. In the show, a tulpa is a powerful monster materialized from the power of ideas.[5] Perhaps this fan-created tulpa will become powerful enough to create Destilence within the writer's room of Supernatural.

The meme spread within the Destiel fans on Tumblr quite quickly. An anonymous user suggested that the No-Homo Intern was actually Supernatural showrunner Jeremy Carver working undercover-boss style.

He literally just wears a fake moustache and sits in the corner. And they all pretend not to know it’s him.

'According to my research, it would take about twenty-five percent more romance for the fandom to pick up on it.'

'Are you sure, Jerem - I mean, nameless intern?'

Jeremy adjusts his stack of printed-out tumblr meta, sniffs, and says primly, “That IS my job, sir.'"[6]

A similar meme, The NSA Shipping Agent was generated by tumblr user GrandpaDean:

which led to fireintheimpala and others to chronicle this exact struggle in the form of a comic-style fanart [8].

The first image of the No-Homo Intern was 'a true hero', an image of a fake mustache projected onto the nights sky reminiscent of the bat-symbol from Batman [13]. The first image of the No-Homo Intern as Jeremy Carver was an edited photograph of Carver in a sombrero and beard. This image is used as a reaction image paired with the expression 'seems pretty heterosexual to me' in response to many Destiel-heavy gifsets and images on Tumblr. [14] In more recent times, the no-homo intern's hat has changed away from the sombrero to a variety of other silly disguises, most notably the squid hat.[4]

For a full chronological recording of all NHI posts: http://nohomointern.tumblr.com/tagged/The-NHI-Case-Files/chrono