Night Moves is a slash Man from UNCLE anthology. The covers and interior art is by Suzan Lovett.

These were some of the first zines that I bought in this fandom, and they were a great way to start out. The stories are by some of the best-known writers in MFU, and they're enjoyable reading, well edited and engrossing. Plus, the artwork scattered throughout #1 is beyond lovely.[1] 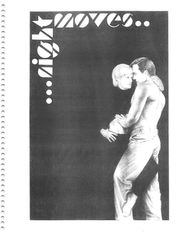 Editor's notes: "First, we would like to thank our wonderful zine writers for trusting two rookie editors with their work. Their dreams are the backbone of our zine. Next, we would like to thank Suzan Lovett for her breathtaking art, which truly captured the visual soul of each story. To [April Valentine], many thanks for the how, who, what and where of doing this zine. And last, but not least, a very special thank-you to [K.C.] without whom you wouldn't be reading this zine. K.C. did all the legwork for this zine: delivering, picking-up, binding... above and beyond the call of friendship or duty. And thank you all for buying and reading our first-time effort."

[Dreams of Annabel Lee]: Gorgeous, one of my favorite pieces in this fandom. A poignant look a possible hidden pain behind Napoleon's smooth façade, and how Illya might react when that pain is revealed. One thing I particularly enjoy about MFU is the absence of personal history for both guys in canon; it opens up such possibilities for fic writers. Theresa takes one of the few nuggets of info that was bandied about during development of the show and uses it to weave this engrossing tale.[2]

[Dreams of Annabel Lee]: Dreams of Annabel Lee is a deceptively simple h/c story that inverts the traditional roles in a most elegant and believable fashion. In doing so, it provides a new perspective on both characters. Napoleon's fear and avoidance of emotional intimacy is pinpointed and explained convincingly. And in this new scenario, Illya shows compassion, which is a welcome change from his trademark cynicism. His method of helping Napoleon is only implied in the story, but given what we know of him, it is strangely appropriate and most in character. As Ms. Kyle recognizes, outward detachment does not exclude the capacity to feel and empathize with others when the need arises. The subsequent sexual encounter reflects the new level of intimacy between the characters. The inversion of their traditional roles is here too, but the dialogue grounds the participants as the characters we know.[3]

[Pas de Deux]: Less one thinks that it is Illya who is always on the receiving end [of hurt/comfort], Ms. Kyle has written a number of detailed slash stories that show both characters suffering, each in his own way. In Pas de Deux, Napoleon wrestles with his growing love and desire for Illya. Illya cares for him, but a past experience has left him scarred, both physically and emotionally. He refuses Napoleon's advances with his customary aloofness, and the growing tension erodes their relationship.[4]

Night Moves 2 was published in May 1998 and contains 161 pages. The cover illo is by Suzan Lovett. The zine has no interior illos. 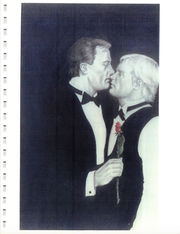 See reactions and reviews for The Games People Play Affair.

[Jaguars in Heaven]: Intriguing view of the afterlife in a deftly written story that manages to be both amusing and very touching.[5]

[Jaguars in Heaven]: A matter-of-fact, unsentimental take on one possible outcome of the NS/IK partnership. One of the things I like most about Jane's writing is her lack of flowery prose and affectation; the language is always very straightforward, and I find it to be more powerful for its stripped-down nature. That's never more the case than in this story, which is so wonderfully nuanced and touching.[6]

[zine]: Cover: to die for—not surprising, since it's a Suzan Lovett. The pose—Napoleon and Illya both dressed in tuxes, standing chest-to-chest, their faces almost but not quite touching, Napoleon holding a red rose is incredibly sensual. While reading the stories inside I kept flipping back to the cover to stare at it again.

"A Mid-Winter's Night Affair" by Sarah Lindsay. A familiar slash situation—Napoleon and Illya stranded in a cabin, miles away from civilization, but with a new and different twist. Illya wakes up with Napoleon sleeping on top of him (they're sharing a mattress) and responds by lashing out, to Napoleon's surprise ... until Illya reveals a secret from his past. A poignant, loving story—sweet without being sentimental.

"The Games People Play Affair" by [Rosemary C]. This is part two of the famous "Post-Gurius Affair" series. I love this power play between Napoleon and Illya—so intriguing, so typically male—and am very much looking forward to more in this series.

"The Blue Christmas Affair" by Linda White. A wonderfully realistic story about life in the spy business, which mostly takes place during an informal party of U.N.C.L.E. agents on a Christmas night right after a fellow U.N.C.L.E. agent has been killed. This story's fascinating supporting cast is one of its strongest points (I love Tuula Crighton!) And the image of Napoleon and Illya dancing together was so-o-o sensual.

"Jaguars in Heaven" by Jane Terry. I admit this was one of my favorites—a wonderful fantasy about Illya's experience with the Afterlife, and being rewarded for his good deeds on earth by being allowed anything he wants in Heaven. The contrast of the gentle (but not overdone) humor and the painful situation (Napoleon and Illya both having to deal with Illya's death) was beautifully done. And I loved the surprise ending!

"Confidences" by Taliesin. This is one of my favorite slash situations—Illya and Napoleon stuck somewhere, alone, and being forced to reveal truths—and this author, with a mastery typical of her, handled it beautifully . . . with some unexpected twists too. This time, they're stuck in a pipe in a THRUSH hideout while they wait for rescue, and Napoleon, realizing Illya is claustrophobic, calms his partner with conversation . . . and more. A wonderfully different story. I just wish it had been a little longer. I wanted to know what happened next!

"The Similar Features Affair" by [Rosemary C] (novella). As always the case with this author, this story is beautifully-plotted, beautifully-written, agonizing, sensual ... and hot-hot-hot! Told from Illya's pov, it shows what happens after Illya is—he thinks—seduced by a brutish Napoleon one dark night. The situation is unbearably painful. We can feel Illya's anguish every step of the way—but the resolution is completely satisfying. RC is one of the few writers who can make me get a lump in my throat and shiver with sensual delight at the same time. A page-turner and toe-curler.

Since I wrote one of the stories in the zine and therefore didn't feel I could be objective about it, I asked Jane Terry to comment on it for this review. Here is her addendum: "The Phoenix" by Elizabeth Cochrane. I guess I am more drawn to this story because it revolves around a favorite fantasy of mine, that of a completely innocent Illya being initiated into the joys of sex. Elizabeth mentions in a footnote that she was inspired to do this story by a story that I co-wrote with PSmythe ("Initiation to Innocence", in Relative Secrecy 1), so it does stand to reason that I would like it. In both of these stories Illya is sexually dysfunctional for medical reasons. In "Initiation", the sex between Napoleon and Illya is motivated more for practical reasons and the relationship is more of friendship. In "Phoenix", the sex is also motivated for pragmatic reasons, however it evolves into something warmer. It is a challenge to write a virginal Illya without having him seem weak or girlish. Despite his physical condition in "Phoenix", Illya is portrayed as being a strong character who has learned to live with his limitation.

Elizabeth again: All in all, a great zine for those of us who love relationship, angst, and lots of explicit sex. Highly recommended. Another winner from Asbestos Press! [7]