Nexus is a gen multifandom anthology.

Nexus 1 was published in October 1984 and contains 55 pages. 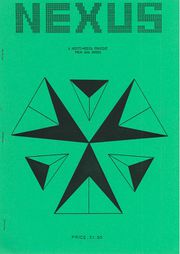 cover of issue #1, Anais
From the editorial:

Welcome to NEXUS - the first in what we hope will turn out to be a series of mixed-media fanzines from AAA Press.

With the widespread variety of tastes and interests to be found in today's fandom, and with new TV shows and movies coming up and attracting their own followings all the time, it's hardly surprising that the fan writing scene should be producing such an incredible diversity of media-related fiction. AAA Press is proud to present in this zine a selection ranging from the '60s classic MAN FROM UNCLE, through such time-honoured favourites as STARSKY AND HUTCH, right up to the most recent craze to hit fandom in a big way, THE A-TEAM - and more besides!

We're always willing to consider any m/s, of whatever length, based on any series (although wg don't necessarily promise to print everything we get ... if you're sitting on a 3,000-word EMMERDALE FARM tie-in, we're afraid you might just be out of luck!) for publication, either in future issues of NEXUS or as independent publications - so, if you're sitting on a masterpiece of media (or original) fiction (or even non-fiction) and can't think of anything to do with it, why not send it to us? We'd be happy to hear from you!

In the meantime, we'd like to thank all our contributors to this current issue of NEXUS - JLSM, Cass, 'Amy' (pseudonyms rule!), Sue Williams and Susan M Reddy ... and, of course, Crazy Charlie, whose limericks may not have very much else to recommend them but they DO fill up the ends of pages nicely ... oh, and she says the logic problem's dead easy this time., too!

And more thanks - to Jane Watkins, who proofread, and to Linda Hepden, Lesley Sapsford and various other members of The Thirteenth Tribe for the use of Boomer the duplicator and for help in printing, collating, and all those other boring but oh-so-necessary little jobs that producing a zine entails. We couldn't have.done it without you.

Nexus 2 was published in March 1988 and contains A-Team fiction by Lori Beatty, as well as M*A*S*H and Tales of the Gold Monkey content.