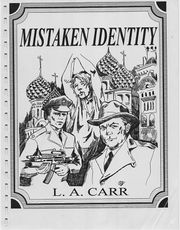 Mistaken Identity is an Equalizer novella originally published in Fall 1996. It is 118 pages, double column, 10-point type. It was written by LA Carr and has a cover by Dani Lane.

Kostmayer entered Gorki Park with his eyes scanning his surroundings behind the sunglasses he wore, the dark lenses keeping their rapid motion from being noticed by the wandering Soviet citizens and random KGB and GRU personnel. The more he looked the part of the idle Muscovite, the better his chances. Now that the mission itself was over, he wanted to keep the chances of his discovery low. Very low.

It was over, except for delivery of the film and that one small piece of equipment lifted out right from under their noses. He was grateful once again for the years of McCall’s tutoring; those lessons had gotten the small microchip out of the labs and had gotten him away undetected. All he had to do was dispose of the film and the gizmo, pick up his airline ticket, and head home...

This story started back in 1988, when The Equalizer was still in production. It came in a dream at first (like a vision), brought by Mickey Kostmayer to me, and, like Topsy, grew. The first draft was completed (all 244 pages of it) on my old, 'manual' word processor (no, it's not DOS compatible!) back in 1990, and run by a collection of editors, who all soundly chastised me with different color pens. Then it sat. (Maybe like fine wine? It has to age?) It sat for a very long time. And something gnawed at me.

Finally, I read over the notes these kind people wrote me, and realized the flaw - the denouement came far too soon. It needed some serious restructuring So, with a determined hand and eye, I went back to it. And, with friends who would beat me over the head to make sure I was doing my daily quotient of MI, I managed to pound the thing back into place.

There's a specific reason there's no internal art. I planned on having some, but realized that good illustrative art is hard to come by, especially in a more 'off-shoot' fandom. 1 didn't want portraiture - the last thing the reader needs, in the midst of a tense moment in the story, is to turn the page and find a smiling face coming back at them. The entire tone of the material would be lost. I do hope the words are illustrative enough (though some of my editors say they're too illustrative!)

Lastly: I feel like Tom Clancy. No, I haven't signed a major book deal. (I wish!) But, when the film version of The Hunt for Red October came out, they had to use all sorts of disclaimers, since Gorbachev and Yeltsin had headed the reform of the

Soviet Union. (Those of you who have read my story "All But Past" in The Equalizer Report #1 will know my penchant for odd political situations!) Please keep in mind that this story took place under the old, hard-line regime of Communism, when it really was Us versus Them.