Masquerade is a Kirk/Spock story by Lynn Mitchell. 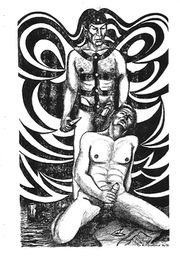 the illo by Barbara P. Gordon which the story is based upon

It was published in the print zine Duet #6, and one of a series of fanworks based on a single illo. The story was also printed in JKS Enterprises and Re-Mix.

"After rejecting the advances of a man at a bar, Kirk meets Spock at a cabin for shoreleave, unaware that the man has followed him. "

Poor Kirk. A character called Morgan, on leave  from his ship, takes a fancy to Kirk, follows him to his rendezvous with Spock in a forest cabin and promptly swaps bodies with Spock. The consequences of this are  frightening for Kirk as he watches his friend turn into a sadistic monster. The ending  is poetic justice. [1]