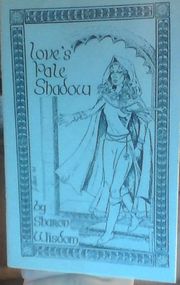 From an ad in The World of Dark Shadows #71/72: "An absorbing tale of Julia's encounter with an ancient Celtic king, a curse that has bound them together nearly for a millenium, and Barnabas' frantic attempts to return Julia to Collinwood with him. Mystical, haunting, and sweepingly romantic."

Wisdom crafted another terrific, “alternate world” tale in Love’s Pale Shadow, under the Lone Gull Press emblem in 1993. This turnabout-is-fair-play story depicts Julia falling in love with another vampire, one far older and more in tune with his preternatural abilities than Barnabas. Julia embraces the lifestyle and there’s a supremely satisfying moment when she and Barnabas confront each other again, many years later, and Barnabas gets an overdue emotional comeuppance. Significantly, Love’s Pale Shadow adopted a new attitude toward vampirism – that a cure was not necessarily desirable, that it could be humanely managed. This theme seemed to presage a similar theme in books by Anne Rice and Stephanie Meyer’s Twilight saga. [1]