Lair of the Blue Falcon

Lair of the Blue Falcon is a gen Star Wars 165-page novel by J.A. Berger. It contains extensive art by Z.P. Florian. 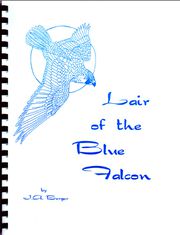 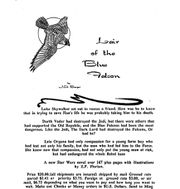 It was winner of the 1995 Star aWards for best Star Wars novel.

From the flyer: "Luke Skywalker set out to rescue a friend. How was he to know that in trying to save Han's life, he was probably taking him to his death? Darth Vader had destroyed the Jedi, but there were others that had supported the Old Republic, and the Blue Falcons had been the most dangerous. Like the Jedi, The Dark Lord had destroyed the Falcons, or had he? Leia Organa had only compassion for the young farm boy who had lost not only his family, but the man who had led him to the Force. She knew now that compassion, had not only put the young man at risk, but had endangered the whole Rebel cause."

From an ad in The Monthly: "Luke wanted to save Han Solo's life; how was he to know he was probably taking him to his death. Darth Vader had destroyed the Jedi; that was a fact, but had he indeed destroyed the Blue Falcons -- the Jedi's main warrior force? Leia Organa had wanted to save Luke pain; had she instead only made him more vulnerable to Emperial [sic] interrogation?"

From online version: "As Darth Vader searches for them, Han Solo and Luke Skywalker must take refuge with a secret organization that provides the key to Han's past and their future."

I just wanted to write a quick note to let you know how much I enjoyed THE LAIR OFTHE BLUE FALCON.

The story was very well written, fast paced and one of those 'can't put it down until I've finished it' types. I enjoyed the new characters that were introduced It was nice to see a Wookiee (Butaka) who was intelligent and not just some big 'dog' I liked M'Fe a lot.

Actually, I think that he is a foretaste of what Han might be like at M'Fe's age. I've enjoyed J.A.'s work in the past, loved this one and can only hope that she will start writing more and more SW stories. Well done![1]

The LAIR OFTHE BLUE FALCON This is a huge story, with a fast moving plot, that will entertain Han fans all over the galaxy. Han gets more (much more) than his usual share of torture. But this is more than just a "get" story: it is a showcase of Han's abilities and talents, and it creates a very interesting background for him, mysterious but quite believable. It is this background that also seals Han and Luke's friendship, transforming it into a fascinating Jedi symbiosis during a very uplifting ritual. The secondary characters are good, too, Wookiees, Corellians, Vader, yes, even Vader gets apart, and of course, Leia, Chewie, and the tattoo of a blue falcon - actually, that plays a very important role... I'd suggest to make yourself comfortable on a long night and read this in one setting.[2]

The plot is well thought-out and executed, the characterizations beautifully drawn, and the illos dynamic. The interaction between Han and Luke is sincere and believable, while the scenes with Vader are deliciously ironic. The entire idea of the Blue Falcons is fascinating, and I'm hoping for a sequel. [3]

Jean Berger's novel, LAIR OF THE BLUE FALCON , is fascinating. The idea of the Blue Falcons joining with the Jedi to preserve galactic order makes a lot of sense. And there are so many intriguing possibilities that can be developed from that I really enjoyed all the background on the Wookiees and their special relationships with the Falcons. Jean makes all the pieces come together so beautifully that I found myself saying "well, of course, how else could it be?"

ZPs illos are fabulous. She's outdone herself this time. And the presentation of the zine including the gorgeous Falcon cover is wonderful. Great job, Ming! I hope there will be other specials (hint, hint!). [4]

You know how fast I read, well this was no exception, I read it from cover to cover over one weekend. Since then I have read and re-read it several times. This has to be one of my favorite Star Wars stories. I have always enjoyed JA Berger's stories but this one was exceptional.

Her understanding of the characters is so good, they come from and what motivates them seems to come naturally to her. All of them are great The ideas behind the story are so well drawn. I especially love her working of Han The Blue Falcons answer so many questions that between Jedi and Falcon and have been raised about his past and give believable reasons for his present attitudes. She manages to make him everything I have always thought he should be.

I enjoyed the character of M'fee he is so believable and wonderfully well drawn. The sort of man it doesn't do to cross as Han has found out to his cost. Again I liked the insight we get into Han's background through M'Fee's eyes. He doesn't seem to miss much which makes Han's life very difficult. I'm glad to say! Also liked Butaka and look forward to reading more about the influence he has had on young Han. The ideas behind the story are beautiful. The idea of the link and that which compliments the sealing. The scene in the chapel was so moving. I think its the descriptions and the backgroimds that help to make this more than just another story. It draws you in, is believable, exciting funny and sad in equal measure. Enjoyed Leia's reactions to Han in his uniform, comes as no surprise to me that the man looks so good. Also the running gag about MPRT and Han's eventual comeuppance. Please pass on my thanks to the writer, I am already looking forward to reading more in Bright Center. Once again thank you for the stories.

Also thank Z.P Florian for her story as well and thanks to you for all your efforts to get this into print, best read I've had in ages.[5]

I very much enjoyed Lair of the Blue Falcon by J.A. Berger. I've liked her work ever since the old days of Facets, the Harrison Ford zine, which was the first Fanzine I ever read. Getting to read a novel-length work by her was a reiil treat. MPRT was a great addendum to it, also. [6]