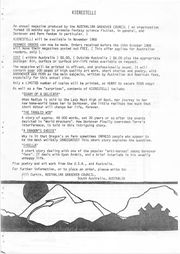 Kierestelli is a gen Darkover zine of fiction, art, and poetry. It was published in Australia. There appear to be two issues. 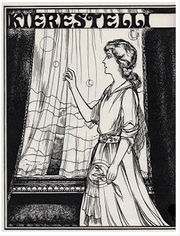 cover of issue #2, Pyracantha: "I Was A Pre-Raphaelite Pollen Fan: This was created for the cover of a Darkover fan magazine in Australia. Yes, there are (or were) Darkover fans Down Under. "Kierestelli" is a Darkovan lady's name which means "Crystal." The title of this damsel's picture is "Waiting for the Ghost Wind." The "Ghost Wind," on Darkover, is the springtime event of the pollination of psychedelic "kireseth" flowers, where the air is filled with intoxicating and aphrodisiac plant material which also enhances your psychic abilities. A few whiffs of this and your Darkovans, even the chaste maidens like this one, are ready to engage in springtime orgies! Remember that Marion Zimmer Bradley dreamed up a lot of this stuff in Berkeley, California in the 1960s and 1970s, when times were high. I used the "Pre-Raphaelite" 19th century art style for many of my Darkover pieces, but this one's description in my catalogue says it was adapted from a silent film player, Marie Doro, in a movie from 1918... Original art is black ink on illustration board, 8 1/2" x 11", May 1985." [1]

It was originally a newsletter published every eight weeks, but was then planned to be an annual zine. It appears there were two issues. [2]

Kierestelli 1 was published in Fall 1980 and contains over 100 pages.

Kierestelli 2 was possibly published in 1985.