The Just Between Series is an epic Janeway/Seven femslash series by G.L. Dartt. It consists of 50 stories broken down into five 'seasons'. The series follows the trials and tribulations of the relationship between Janeway and Seven which begins somewhere near the end of the first year Seven came on the ship (season four on the show) and carries them all the way back to the Alpha Quadrant and to a new vessel.

From the story notes of Just Between Us: "This story was written and takes place shortly after the events in Prey and Retrospect, which aired in February, 1998. For the rest of the JB series, similar events will take place as they did in various episodes on the television show as I was writing the series, but because of the relationship developed at this point between Janeway and Seven, obviously the televised missions wouldn't happen exactly the same. Certain discrepancies will arise, but whenever possible, the events taking place on the television show were adhered to within the confines of the JB universe. (Of course, at the time, I also didn't know I was writing a series which would span 50 stories and two more seasons of Star Trek: Voyager.)"[1]

GL said about the series that it "started as a bit of a joke in the winter of 1998. A few other Trekkers and I were emailing each other and discussing a relationship between Janeway and Seven of Nine. I contended that such a relationship was impossible and wrote a little scene (the infamous 'bridge scene') to prove my point that Seven would not know how to handle a romantic relationship, and Janeway simply wouldn't know how to handle her. Fifty stories later, I don't think I've proved my original contention at all. *G*"[2] 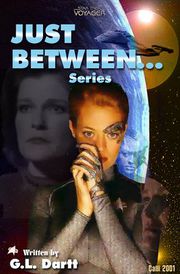 "A delightfully charming, romantic, and poignant first-time story that has Captain Janeway struggling with feelings for Seven of Nine and finally giving in to these only to embark on an emotional journey with the young Borg many times more challenging than anything she's ever experienced before. Painfully inexperienced not only in matters of intimacy but in human relationships and Starfleet protocol as well, Seven struggles to please as she opens a vulnerable heart to the Captain - never suspecting how fear and uncertainty can some- times make humans deny what their souls crave the most. Gina's characterizations in this story are beyond OUTSTANDING." (Lunacy)

Just Between Them (~32,000 words). This installment takes place after the events of The Omega Directive, near the end of fourth year of their journey, and was first posted in May of 1998.

"In this sequel to JUST BETWEEN US, Janeway and Seven continue exploring their relationship as the Captain becomes aware of just how difficult loving a member of her crew can be and Seven starts to experience some of the other emotions that sometimes come with a relationship. Meanwhile, Voyager encounters a friendly alien ship with a very self-assured commander who immediately takes a special interest in the beautiful Borg among the humans." (Lunacy)

Just Between You & Me (~31,800 words). This takes place after the events of One, near the end of fourth year of their journey, and was first posted in June of 1998.

"An OUTSTANDING sequel to G.L.'s previous two Janeway/Seven stories JUST BETWEEN US and JUST BETWEEN THEM which leaves NO DOUBT that this talented writer and this new type of alternative fan fiction are just getting better and BETTER! :) This third installment in the series finds Janeway and her half-Borg partner experiencing some problems in the relationship as the Captain continues to put her personal life second to her job and Seven resorts to some Klingon measures to show her dissatisfaction ;-) Before the two can try to resolve the problem fate cruelly intercedes leaving a devastated Janeway trying to survive without the young woman who's so thoroughly captured her heart and Seven achingly lonely amidst a multitude of strangers, finding solace in an unexpected link to the Starfleet Captain forever in her thoughts now." (Lunacy)

Just Between Friends (~31,600 words). This installment occurs after the events in Hope and Fear, near the end of the fourth year of Voyager's journey, and was first posted in July, 1998.

"The story has Janeway and Seven facing a new crisis when the former Borg's implants begin to fail and she has to undergo a life-saving operation. Determined to improve the odds of that operation as much as possible, Janeway approves the doctor's request that they create a new assistant for him, never suspecting the repercussions her decision will have. [...] G.L. uses a technique in her storytelling that is very reminiscent of the TV series itself, including subplots within the major story that are just as intriguing and thought-provoking." (Lunacy)

Just Between Enemies (~37,800 words). 5th in the Just Between Series. It was written in August of 1998 and takes place after the events in Hope & Fear.

"Perhaps the most delightful entry to date in G.L.'s *outstanding* JUST BETWEEN SERIES, this story marvelously combines drama with humor, suspense and some downright wickedness! It begins with the Voyager crew helping an alien race to save their planet, after which the very grateful aliens insist on hosting a celebration for their benefactors. It will be a challenging experience for all concerned as Seven finds herself dealing with human insecurities, B'Elanna and Tom have to fight the urge to kill one another, and Janeway has to balance diplomatic responsibilities with the need to keep her crew in one piece all the while thinking of a certain ex-Borg and the many twists and turns their relationship is taking. [...] A fine addition to one of the best fanfic series on the Net - this gets my HIGHEST RECOMMENDATION!!" (Lunacy)

Just Between a Rock & a Hard Place (~31,700 words). 6th in the Just Between series. It was written months before even the rumors of Dark Frontier surfaced. It was posted in the first part of September, 1998, prior to the beginning of the fifth season of ST:Voyager.

"an emotional rollercoaster that cruelly strips Janeway and Seven of the comfort they've found in one another - pitting them in a life or death struggle against an old enemy...and one other." (Lunacy)

Just Between Realities (~35,900 words). 7th in the Just Between series. It was written and posted prior to the beginning of the fifth season, around the last half of September, 1998. It was originally called Just Between Then & Now.

"Set a month after the events in JUST BETWEEN A ROCK AND A HARD PLACE, this newest entry has Seven and her captain recuperating from their recent ordeal with the Borg collective when a sudden energy burst from an anomaly in space plunges the two into an alternate universe - a mirror world where Voyager returned to Earth years before - Janeway's life went in a very different direction and decades before a child named Annika Hansen was never assimilated by the borg - remaining fully human." (Lunacy)

Just Between Stars (~30,700 words). 8th in the Just Between series. It was written and posted around the first of October, 1998. It was originally titled Just Between Here & There.

"This installment in the series offers a "vacation" of sorts from the familiar STAR TREK world, taking Janeway and Seven back to the basics in an adventure which cements the bond between them even further." (Lunacy)

Just Between Memories (~32,300 words). 9th in the Just Between series. It was written and posted during the first part of November, 1998, occurring after the events which took place in Night and Drone.

"MEMORIES is possibly the most moving and most emotionally compelling entry in that series to date. It grips you with that first sentence and will keep you riveted until the last one. It begins with an anguished Seven on her way to Sickbay after learning of an accident on the Bridge...an accident which has critically injured the captain of Voyager. After a very delicate operation Janeway escapes death but the woman that survives is a very different one from the partner Seven has been sharing her life with - she's a Starfleet captain with no memory of the past three years..." (Lunacy)

Just Between Right & Wrong (~31,800 words). 10th in the Just Between series. It was written around the end of November, and posted the first of December, 1998, shortly before the events in Timeless.

"G.L. does an exceptional job here of rebuilding the relationship nearly torn apart in the earlier story. Maintaining a pattern that is true to the STAR TREK modus operandi, she presents us with a suspenseful subplot that involves many of the supporting cast while at the same time drawing the readers ever deeper into the emotional challenges faced by the two heroines." (Lunacy)

The following two installments were a collaberation between G.L. Dartt and Xena fanfic writer B.L. Miller.