John Waters (b. 1946) is an American director/screenwriter from Baltimore, MD best known for both his infamous Midnight Movies from the 1970s, such as Pink Flamingos, and for his lighter mainstream work such as Hairspray and Cry Baby.

He addressed this topic in the "Sort-of Famous" chapter of his 1981 autobiography Shock Value: A Tasteful Book About Bad Taste about being invited to the Berlin Film Festival. "The buffs are unbelievably serious and went crazy when I told them my films weren't political. "YES THEY ARE!" they screamed, and I backed off. I guess you can read anything you want into a screenplay."[1] 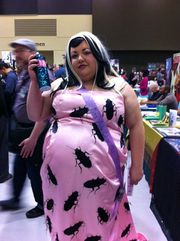 A fan dressed as Tracy Turnblad in her "Bug" dress

John Waters' films have inspired fanworks; he himself is not a common RPF character. All of his movies are "Yuletide-eligible;" they are niche films with no large followings. There is little fanfic or fanart related to them; Hairspray gets the most, and that's for the 2007 movie based on the play adaptation of Waters' original movie. (Fanfic of a fanfic, in a way.) They have inspired cosplay at conventions, especially Hairspray.