Introduction to the Nimoyan & Spock's Scribes 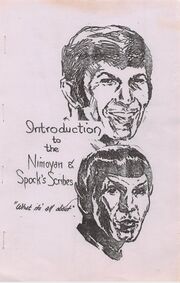 Among those in that generation was a 39-year old semi-invalid S. Cornelie Cole, "Sam".[1] It took her three visits to this other world to really know this man called Spock, but know him she did, and in April of 1967 she joined a thing called a 'fan club'. Upon joining, Sam decided she could snare five unsuspecting friends and family members and thus win a record for bringing five new-members into the then LNNAF. The new members saw Sam's pictures and cried, "How do we get pictures of Mr.Spock?" Sam said. "Write letters" and with those innocent beginings, the germs of the Spock's Scribes were planted.... Sam got more members to make seven, and Peggye Vickers, then president of the LNNAF, said, "Sam, you are a club!"...

Due to age and space, the Scribes split into sub-groups which met at different times. The Spock's Sprites were girls 5-11. The Locos were girls 14-15. And the Sensors were boy 6-12, with Sam's son Alan as leader. What did they do? Attend meetings, drink gallons of Dr Pepper, eat tons of Fritos, and write letters. The Sprites made a scrapbook of the things they wrote, drew, and colored, to be sent to Mr. Spock, and the Sensors collected scientific things, both fact and fiction, connected with the show.... And the Scribes grew, no one knows for sure how, but by the time cancellation was threatened again, there were many to send out letters of protest. This time to fail to save StarTrek. But they did succeed in reminding the networks that Leonard Nimoy was a man with a following. He was called in from the cold of cancellation to unpack his make-up kit and become Paris for Mission; Impossible for the next two years.

With this, Sam decided to give the members a choice, according to their own loyalties and interests, and split the club into the Spock's 'Scribes, and the Nimoyan Scribes. Thus, she gave the members a choice. By this time, the clubs were so large, that Sam's health got to be the price, and duties were delegated to the Vice-President, Secretary- Treasurer, and Area Captains. She still was able to write her delightful stories, and edit the material, but no longer had to worry about all the details. By the Spring of 1974, it became apparant that more than 95% of the membership wanted to be in both clubs anyway, so they were rejoined into one, The Nimoyan/Spock's Scribes. And the publication schedule changed. Now there is a publication to members every two months, instead of every three as before.