The "Intro Vid (2009)" (or Introduction Vid 2009) was the opening vid at Vividcon's 2009 Premieres Vid Show. Intro vids are often overlooked by convention goers as their main purpose has traditionally been to ask the audience to refrain from disruptive behavior and to remind them to turn off their cell phones (or in pre-cell phone days to remind them to turn off their pagers and to refrain from throwing things at the screen).

The Vividcon 2009 Intro Vid, however, opted for a different approach, instead re-telling Star Trek: Reboot using hand drawn animated llama characters in 60 seconds. It was modeled after Angry Alien Productions: 30-Second Bunnies Theatre videos, except instead of using animated rabbits, the vidder animated llamas, the Vividcon mascot. The voice actors were fan vidders or spouses/significant others of fan vidders. Over 12 people participated in the voice acting, some of whom were in the audience at the time the Intro Vid premiered. The combination of hand drawn cartoon llamas, the rapid fire retelling of a popular movie and the participation of community members made the intro vid a hit. The vidder was even able to slip in the traditional "Turn off your cell phone" reminders at the end, with barely anyone noticing, as they were laughing too hard. 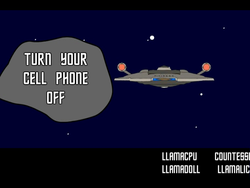 "Turn off your cell" reminders as credits scroll by, with fans humming the Star Trek theme song in the background
Retrieved from "https://fanlore.org/w/index.php?title=Intro_Vid_(Vividcon_2009)&oldid=1188421"
Categories: