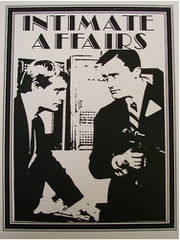 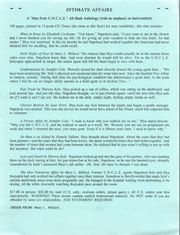 Intimate Affairs is a slash Man From UNCLE anthology and is 190 pages with no art.

[zine]: Intimate Affairs is the first slash zine I ever bought, an excellent introduction to fandom. The stories are emotion-centered, many of them hurt/comfort, and the zine is a classic of that slash subgenre.

When in Rome by Elizabeth Cochrane is an epilogue to the Terbuf Affair. Napoleon is suffering the pangs of rejection along with the aftereffects of the events depicted in the episode. Illya must decide how far he dare go to alleviate his friend's pain.

Dark Nights of Fear by Mary Millard is a poignant, intense hurt/comfort story. Illya has been tortured and Napoleon appoints himself caretaker to his emotionally fragile partner, leading to unexpected revelations about their relationship.

Confrontation by Jennifer Cole. Napoleon is falling apart and Illya is determined to find out why. The answer will either tear them apart or bring them closer together.

Fair Trade by Theresa Kyle is one of my all-time favorite stories. Right from the astounding opening scene, the twists and turns in the angst-ridden plot keep the reader on edge.

A Private Affair by Jennifer Cole. It is fifteen years later and Napoleon cannot evade Illya's questions about why he broke up their partnership any longer.

No Man is an Island by Pamela Talbott. Illya needs to put some distance between himself and his partner. But Napoleon has other ideas. A battle of wills ensues on a deserted island.

Love and Death by Theresa Kyle. The dangers of the job ignite Napoleon's and Illya's feelings for each other in this emotion-packed, satisfying story.

Wet Dream by Elizabeth Cochrane. His judgement just a trifle impaired by painkillers. Napoleon writes a letter to Illya.

Always and Forever by Susan Devereaux. A hurt/comfort classic, another of my favorites. Napoleon is at his gallant best when Illya needs him most.

The New Tomorrow Affair by Mary Millard. Another fifteen years later story. Napoleon and Illya must come to terms with their feelings for each other before it is too late. [1]