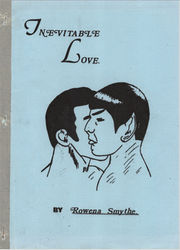 Inevitable Love is a slash Star Trek: TOS 107-page AU novel by Rowena Smythe. It was published in England and required an age statement to purchase.

From the publisher's ad in Universal Translator #4: "It is basically a love story which traces the K/S relationship from its beginning through all the trials and tribulations leading up to their ultimate bonding and the troubles they still run into after it."

From Gilda F: "Following a serious accident, Spock comes to the realization that his feelings toward his captain run a lot deeper than he suspected."

I never read the fanzine but thought the title was notable because it reflected the attitude of K/S fans toward [the] Kirk and Spock [relationship]. [1]

Well, what can I say of this .... This could have been an interesting story if it were well written.

It is an old zine with an awful layout. The author used far too many punctuation marks which makes the reading unpleasant. The story is about Kirk and Spock falling in love, with a lot of hesitation from Kirk's side, but after that all is well and stays very well. No problems between them, nothing negative. The mindmelds are very important and the parts including a mindmeld are the best parts of the story. The sex scenes ... well, you can't call them sex scenes. It is mentioned and they 'posses' each other. Only the mental thing is interesting and is all that I really remember from it. This story isn't told; it is more a numeration of facts keeping together with dialogues.

Apart from that, I read it, enjoyed it because it is about Kirk and Spock, but that's all. [2]

I wanted to make a comment on [Margot V's] review of Inevitable Love....

First of all, I do agree with Margot — this could have been an interesting story if it were well written. I think it's probably the poorest story Rowena — who was a very prolific writer of both gen and K/S during the late 70’s early 80’s — ever wrote.

However, Margot's comments on the layout and punctuation, in fairness, these were not Rowena's fault. Either Doreen or her typists had what I've often described as a creative approach to grammar and punctuation, and manuscripts that were correct when they reached Doreen were invariably thoroughly mangled by the time they were printed. (An exception was Replica by Jane Jones, but that was only because Jane herself typed the stencils). I know of one excellent writer who after her first exposure to being printed by Doreen wouldn't submit anything else to her. Yet a lot of what she put out was very good, story-wise — if you could ignore the cosmetic mistakes. I've seen some of Rowena's original manuscripts, and I can assure Margot that the mistakes in punctuation weren't hers.

Add to that, English is Rowena's second language, and fluent though she always was in it, there were times when the flavour of her native language (French) showed.

Additionally, she had a personal quirk that saw Vulcans as perfect in every respect and humans as less than perfect, with the possible exception of Kirk, and that only because he had the good sense to fall in love with Spock. Add to that she could never understand the relationship between Spock and McCoy — she genuinely saw this as hostile — at least on McCoy's part.

This provided problems that editors who worked with her always had. It was possible to persuade her to 'grey' the characterisations of humans, though she found it difficult to understand how readers would know a character was a villain unless he was completely 'black', with no redeeming qualities. It was totally impossible to persuade her to 'grey' the Vulcans away from all being perfect, or to present the K/S relationship as (basically) anything less than a marriage made in heaven. Doreen was never an editor to ask for much in the way of alteration at the best of times, and I suspect that in the case of Inevitable Love, she gave up entirely on trying to persuade Rowena to make any changes. [3]