You may be looking for Illumination, a Indiana Jones anthology by numerous authors. 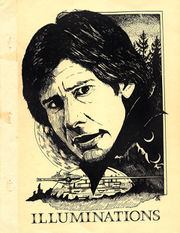 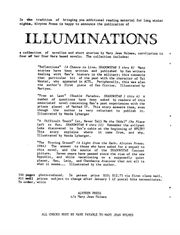 The cover is by Mary Jean Holmes.

Author's Comments on the Fic Therein

The author wrote four long introductions in the zine to each story.

Recently, I received a letter from another fan writer, who said that the first stories were "made to be forgotten." In some ways, I believe she's right; the first fiction I ever wrote definitely deserves to fall into a black hole and never again see the light of day. Some first stories, however, refuse to be shoved under the carpet (or pushed down the drain), and those tales were made to be rewritten.

That statement definitely applies to the first entry in this collection, "Reflections." The first piece of fan fiction I'd ever written, it's gone through more incarnations than some cats. In its first draft, it was a story I wrote for a proposed 'zine my husband, best friend and I were planning to put out late in 1979, one which was going to discuss the most popular genres of fan fiction. I was the only one of the three to ever complete their assignment (though JR, who had the Star Trek category did begin work on his entry, a hilarious piece from a sympathetic Klingon point of view); the result was "Reflections."

I'm not sure why I chose to write about this particular incident. At the time, my great soft spot in the SW universe was for Obi-wan Kenobi. Not only that, I also knew bloody well this same tale would and had been told and retold by every fan with even a marginal liking for Han Solo.

So why did I pick it?

To this day, it remains a mystery. But it was a harbinger of Things to Come. It has gone through many rewritings, to accommodate changes in the universe, to correct inconsistencies, and to eliminate the worst flaws — a fate its descendant, A Chance to Live still has in store for it. For now, however, I commit it to print, so that I'll quit rewriting it to death. Now, I can but hope it isn't already dying from overwork...

This story has a permanent subtitle that will never be removed, a subtitle that has nothing whatsoever to do with the content of the tale: "I Hate This Story."

In every writer's life inevitably come some pieces they feel compelled to write. Some are light-hearted, cheerful stories that bubble up from inspiration like amusing jokes, moving songs, even terrible puns. I've had one or two of those. But, just as inevitably, there come stories that are written for exorcistic reasons, to get them out of the mind before they start festering. At the politest, one might refer to these efforts as "haunting." The best word I can think of to describe this one is depressing.

I must admit I don't know what ever possessed me to give Han a background with this particular prison world. I suppose it sprang from my need to give Double Paradox a little tension, a taste of darkness, a hint of horror. It was certainly easier to achieve this via Han's emotions than via descriptions of lab experiments or such. But having done this, I was stuck. As an author, I needed to know the details of his experiences before I could write about them, even obliquely, in DP. And, having conceived them, I had to go through labor of a sort; I had to get them out of my head by putting them on paper.

I never intended to print this story; I never wanted to. Every time I look at it, I cringe. I am immensely grateful to Wanda Lybarger for volunteering to illustrate it; I could never have brought myself to give visual reality to any of these images.

It's a depressing story, probably the most depressing I've ever written. So, for those of you who read these tales in order and suffer through them, I promise you this: the last two stories are considerably more lighthearted. Even the Midwest Princess of the Morose can't stay down in the dumps forever.

This story doesn't require much in the way of explanation or discussion. Anyone who knows me well knows that, although art and writing have become an important part of my life, music was always my first love. My years in college were spent in pursuit of a degree in music education; voice and harp are my loves; piano and organ were my first instruments; I taught myself guitar so I'd have something to accompany myself with at filksings; flute and recorder and accordion and God-only-knows what else were picked up at whims; composition is a passion. It shows in my writing, even in my SW stories. Aside from the 38 SW based filksongs I've written, there are the songs in several novels, the appearance of instruments like the avllyset, the flute in ACTL...well, you get the picture. My exposure to music therapy during college always fascinated me; hence, it shows up here — for what better a way exists for one to relearn the use of one's hands?

Music aside, I know somebody out there's gonna come screaming at me about a technicality.

So, before the screaming starts, I offer my explanation: one of the small attention-to-detail devices Irvin Kershner and his crew introduced in TESB was the addition of an obvious directional-control device for the Millennium Falcon. For this (and the consistent Imperial rank-insigniae Richard Marquand later threw aside), I thank him from the bottom of my heart. Button-pushing directional controls have always bothered me; look at the difference between video games using push-button controls versus those using joysticks, and you'll see what I mean. Why shouldn't the Falcon have a control yoke? She had one in TESB; so, too, does she have one in my writings. If some people object to this, I say fine; debate is the spice of life. But — as with "Free At Last" — you can't say I didn't warn you.

Well here it is, the "sequel" to A Light From the Dark so many people have asked for, as well as the real story behind that illustration for which Alvyren Press ran a contest in SHADOWSTAR. There is no doubt in my mind that this story isn't going to appeal to all fans, just as there was no doubt in ray mind that ALFTD wouldn't find universal acclaim. But that's okay. I enjoyed writing it, for all the qualms I have about its acceptance. So if you don't like stories that speculate a future together for Han and Leia, don't read it. But if you do, read on. You may or may not find it as entertain[ing] to read as I found it to write.

By the way, the first pages of the story do not set the tone for the entire thing. Trust me. This is not another downer.

I thank everyone who has ever read my novels for their interest in seeing these stories reach print. And I also warn you: I'm not finished yet. There're still a couple more pre- and port-RotJ stories waiting to see publication, and a whole bunch of new ideas that haven't hit paper yet. So long as the interest remains, I'll keep on writing.