How Ray Got His Groove Back

How Ray Got His Groove Back is a sexually explicit Fraser/Kowalski slash story written by Bone and Aristide. The title is a play on How Stella Got Her Groove Back, a film released two years before the fic was written. Ray Kowalski's canonical ex-wife is named Stella. 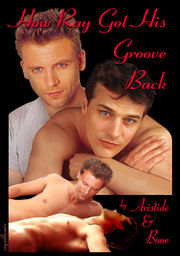 This is a smutty smut fest, a very well written one, that includes some really lovely moments between Fraser and Ray. The premise is that Ray is sexually frustrated, and Fraser wants to help him out. Ray has to come to terms with being with Fraser and being with a man, and figuring out what it all means to him. He draws lines that he keeps crossing, if you know what I mean. *g* There’s also a wonderfully hot little epilogue that should be read in conjunction. This is still, behind all the scorching sex, a love story, and it really comes through.[3]

Bone and Aristide do Due South. You know what that means -- sex! (It shouldn't take long for you to see a running theme in B&A's fics.)

Like all of Bone and Aristide's collaborations, HRGHGB is sweet and smutty and really, really hot. A wonderful mood lifter at the end of a bad day. [4]

One of those stories that pretty much boils down to Fraser showing Ray a whole new world, and Ray realizing just how much he likes it; but it is smokin' hot and well characterized. [6]

HRGHGB should be required reading for the Due South fandom, as far as I'm concerned. The voices are so amazingly spot on the whole thing reads like an episode from the show. Except for the fact that it's All. About. Sex. [7]

from The Slash Slut:

Ray is in that protective place you get when your heart is broke and you just don't think you could stand to feel that one more time. So you swear off love and do alot of that other bullshitting crap that is only really going to last about 5 minutes in the grand scheme of things before you get hit upside the head with an 'I don't think so pal' kindof thing. Fraser is in love with him and thinking himself an idiot because he always seems to fall for the unattainable. Some things aren't so unattainable though. Ray and Fraser help each other out of a long dry spell sexually that leads to finding their way out of the desert of the heart too. This is a wonderful story that just hits the characterization of these guys so on the head that you feel like you are watching a Due South ep. Except with lots of hot sex, and I do mean lots. The way to realizing what he feels is slow for Ray, he has to get through a bunch of hetero denial about what this is to get there, but he does. He eventually stops looking at the outside and sees inward and finds out what all this is really about. It is a great story by two wonderful writers, what more could you ask for in a collaboration. Bone is one of my faves in the Sentinel fandom and she does wonderfully here too. Did I mention there was lots of hot sex in this? I did. Well, it bears repeating. This one is steaming, with a wonderful writing and characterizations to make it so much more than idyll smut. [8]

How Ray Got His Groove Back has been called the "ultimate slash story," and though most dS fans will have read it, no rec site worth its salt could fail to mention it. When Bone and Aristide get together, the result is magic, as any who have read their Sentinel fic will know. This is arguably their best story in any fandom, and certainly it's the most often-recommended due South slash story of all (to see the many places it's been rec'ed, you can check out my due South Slash Resources page).

Like all B&A's fics, this one is heavy, heavy, heavy on the smut - it comes by its NC-17 rating honestly. The premise: Ray is jaded and lonely after his divorce, ready to give up on love, and Fraser is longing for him in his uniquely repressed fashion. Somehow, events conspire so that Ray finds himself introducing Fraser to "the coping mechanism of the modern American male": [dialogue snipped]

HRGHGB has been called a PWP, but in my book that label doesn't fit - this is one of those rare stories in which the plot is the relationship, and the relationship is the plot. As I said, I'm a big fan of (well-written) smut myself, but I recommend this fic even to those who don't typically search it out. Because though HRGHGB, like all B&A's fics, is highly smutty, it's also - again like all of B&A's fics - so much more than "just" smut. The relationship and character development are amazing, the voices staggeringly good, the dialogue witty and perfectly in character. It's funny but not farcical, sweet and tender but not sappy. Fraser's and Ray's confusion and fear and hope, and the deep underlying affection they have for each other, are so poignantly and touchingly portrayed, it makes your heart just quiver. The sex scenes are quite explicit, but they're always incredibly sexy and never crude (except when they're supposed to be, like the description of the porn vid Ray's watching). And the sex is integral to the story; through it we see, and come to understand, the characters and their relationship, their motivations and thoughts and deepest feelings.

It's hard to overstate the brilliance of this story. It's truly a classic, standing up to countless re-readings without ever losing a bit of its magic. Better yet: Bone wrote a wonderful little epilogue, which closes the loop, giving us the most satisfying ending imaginable. [9]

Geez, like this page needs another rec for a Bone and/or Aristide story. I guess it wouldn’t be a problem if they weren’t such amazing writers. But they have outdone themselves with this F/K first time story. Things get a bit out of hand (pun intended) when Fraser unexpectedly drops by while Ray is... ‘coping’. Keep a glass of ice water nearby for this one. You’re gonna need it. [11]

The thing about most fics (NOT this one) is that most character development happens through a long transformative processes, lots of inner exploration, and dialogue between the characters. But in “How Ray Got His Groove Back”, forget all that mental crap. You’ve got Fraser, finally opening himself up to Ray as they masturbate on the couch together. And you’ve got Ray figuring out the “guy on guy” thing when Fraser’s got his dick in his mouth. Or when Fraser’s giving him his first rimjob. Or when Fraser comes on his face at the mere suggestion of Ray sticking his polish sausage in Fraser’s backside.