This page details how to take part in Nomination November, a special month-long event run by Fanlore.

What is Nomination November?

Nomination November is a Fanlore event dedicated to nominations for Fanlore's Featured Articles. Every week during the month of November, Fanlore users can win cool badges for voting on, nominating and improving articles to be featured on Fanlore's main page.

Not sure what a Featured Article is or how to nominate one? You've come to the right place - just read on to find out...

What are Featured Articles?

Featured Articles are the Fanlore pages that are spotlighted every week on Fanlore's homepage, under the header This week's featured article. Here's an example of what they look like: 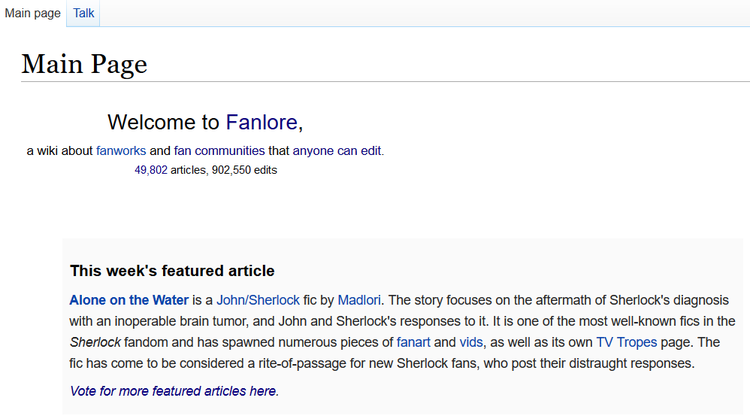 Featured Articles are nominated and voted on by ordinary Fanlore editors. Anyone can nominate or vote on a Fanlore Featured Article -- even if you're brand new!

How to nominate a Featured Article

If you have a page in mind to be featured, check that it satisfies our Nomination Requirements and doesn't appear in our category for previously featured articles. Then, add it to the Featured Article Nominations page as a new section.

If you've got a page that you'd really like to nominate, but it doesn't quite meet the requirements, that's okay - you can work on it as a personal project and bring it up to scratch. Other Fanlore editors will be delighted to help you out!

How to vote on Featured Articles

Your vote doesn't have to be in favour of the nomination, but please make it as constructive as possible if you're voting down a nomination or suggesting that it needs more work. You can also make the relevant edits to the page yourself if you feel you can address them, and then vote!

What do I get for taking part? 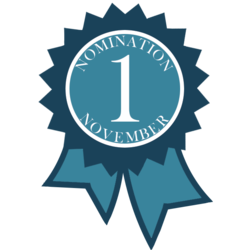 So, we've covered how to nominate and vote for Fanlore Featured Articles, but what will you get in return? There are seven awesome badges to be won during Nomination November.

Every editor who makes a nomination that meets the nomination requirements (i.e. not obviously incomplete or outdated) during each week of November will win a badge, with four weekly badges to be won - plus a fifth special badge for the heroes who nominated something every single week.

There are also badges to be won for voting on Featured Articles, and for becoming a "proud parent" and adopting one of our unsuccessful nominations from previous years and working on it. (Note: you don't need to re-nominate the article in question to qualify for the badge, just make improvements to it). See if you can earn them all!

Many thanks to Fanlore graphic designer CarnwennanB312 for designing our Nomination November badges and banners!

How can I display my badges on Fanlore?

Your badges will be posted to your talk page, so be sure to check there if you haven't received your badge yet. We'll aim to award badges within a few days of your nomination, vote or qualifying edits.

Once you've earned your Nomination November badges, you can display them on your Fanlore user page for everyone to admire! Here's how.

If you'd like to display your badges somewhere other than Fanlore, you can easily do that, too — just right-click on the image (or long press on mobile) and either copy the link address or save it to your device, to be used anywhere you like.

Have fun editing, and if you have any questions, feel free to raise them on the Talk page or contact the Fanlore Committee.