Gregg Press was a press that published some limited edition hardcover versions of Darkover books. 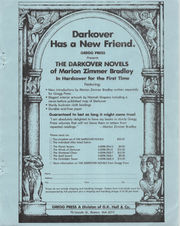 Many of the books have frontispieces created by fan, Pyracantha.

flyer printed in Darkover Newsletter #15/16 (December 1978), discusses paperback books vs hardcovers, and Bradley also appears to give her approval to some Darkover maps

Despite the fact the Gregg Press books have some Darkover maps, Marion Zimmer Bradley was very, very much against fans, or anyone else, drawing maps of Darkover.

"Is there a map of Darkover? The hardcover editions published by Gregg Press have maps in them, but MZB said they were not canonical. She never wanted to be pinned down to a map of Darkover; she said she never knew where she'd need to put a city. [2]

In 1993, a fan asked a common question about any existing maps of Darkover, and Bradley responded: "I don't do maps to avoid boxing myself in suppose I needed a city where the map claims a Howling Waste is located?" Ann Sharp noted that "an attempt at a map was made in the Gregg Press edition end papers, but it's very much out of date now." [3]

See more on this topic at Mapping Darkover.