Ghost in the Machine (Star Trek story by T'Guess)

You may be looking for the Star Trek: TOS/VOY crossover story by Killa: Ghost in the Machine.

Ghost in the Machine is a Kirk/Spock story by T'Guess.

It was published in the print zine Dark Fire #2. 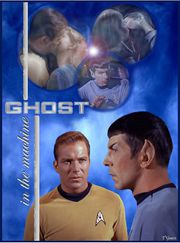 "Kirk and Spock are lovers, in every way but the physical, which is causing Spock to start picking up on Kirkʼs every thought and sensation whenever he has sex with anyone."

Suppose Spock really doesn’t feel sexual desire other than the time of his pon farr? Suppose despite his love for James Kirk, he really does have to wait seven years to experience physical satisfaction? Intriguing questions, and ones T’Guess attempts to answer in this

story. Because Dark Fire 2 is so recently published, I will contain my impulse to tell you all about this wonderful story. There were so many aspects to “Ghost in the Machine” that I liked. First of all, I was impressed by T’Guess’s very visual style of writing. For example, she never has Kirk and Spock seated when the very next sentence has them out in the corridor. The reader can completely visualize each depicted scene, each action the characters take, each expression that flits across Kirk’s mobile face and nuance of emotion on Spock’s. Such clear, vivid writing enables the reader to become lost in the story, without having to go back and reread a particular phase or series of sentences to clarify action or description. (This had only one drawback for me; I learned a bit more about some accoutrements to Spock’s genitals than I wanted to.) I was not aware of the writer telling this tale, only of the story unfolding. I couldn’t turn the pages fast enough. Next on my list to praise: at almost thirty-six full pages, “Ghost in the Machine” is a nice story length, just perfect to read at a single sitting. There is nothing rushed about either the execution or ending of the story. No hurry to get to the “good parts”. I also enjoyed the way T’Guess used several episodes and lines from the series but gave them an entirely new subtext consistent with her storyline. Extremely well done and very clever. Several times I thought I knew where the story was going only to have the author take me in an entirely new direction. I love it when that happens. Kathleen prints warnings for each story in her ad in the KSP. Check them out by all means, but you don’t have to worry about the one that says Kirk and Spock have other partners. Generally that turns me right off a story, but in this case T’Guess made it far more than just palatable. In fact, you don’t have to worry about any of the warnings. This story could have appeared in any of our other K/S zines. Trust me on this one.

Three of T’Guess’s beautiful cgas (including the intriguing cover) enhance the reading experience. You’ll enjoy “Ghost in the Machine.” I did. [1]

I loved this story -- it does a great job of delving into the psychology of both Kirk and Spock in a very convincing way, leaving this reader aching with the tragedy of love going wrong. I loved the resolution -- well done![2]

Very satisfying -- it all flowed beautifully, nothing seemed contrived or forced. I loved the inclusion of the Sarpeidon incident as a source of enlightenment for Spock. Makes much more sense than the original script! Thanks![2]

I was very lucky to read this wonderful story twice. the first along time ago. i lost it and so wanted to read it again. someone posted it and i so followed it. and was so happy to see this . just a great smart and at time sad story. so much love to you thank you. xoxoxxo[2]

Interesting story about a difficult problem, with a plausible resolution. Much more interesting than most K/S I've read, and you use the events of "All Our Yesterdays" well![2]