Futurespeak: A Fan's Guide to the Language of Science Fiction

Futurespeak: A Fan's Guide to the Language of Science Fiction is a 408-page book by Roberta Rogow. 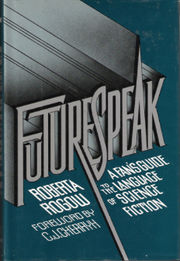 It was originally published by Other World Books, then by Paragon House.

In 1989, Roberta Rogow referred to her new project which, at the time, was called "Futurespeak: A Dictionary of Science Fiction." [1]

FUTURESPEAK—A FAN'S GUIDE TO THE LANGUAGE OF SCIENCE FICTION by Roberta Rogow: the first-ever SF dictionary for fans, this delightfully idiosyncratic reference does more than gloss the genre's hundreds of fictional words and phrases. For friends who smof at cons, sing filks, and dress up as Bems -- or for mundanes who just want to know what this babble means — FUTURESPEAK is here. From Access Code to Zombies, this treasury of over 1,000 of SF fandom's favorite words, names, and expressions demystifies the argot of SF convention goers and fanzines... explains terms from physics, astronomy, aerospace, and other sciences that play a pivotal role in SF literature. It includes profiles on writers, filmmakers , publishers, and other influential figures linked with SF and fantasy fiction. It even explains the lingo behind such popular fantasy games as Dungeons and Dragons. Handy appendices include everything from addresses of SF publications, organizations, and conventions to entry rules for the Hugos and Nebula SF awards. Roberta Rogow is editor or co-editor of three long-running SF fanzines, a successful SF story writer, costumer, filksinger/songwriter, and a frequent attendee at SF conventions across the country. Advance orders will be personally autographed by her. Hardcover copies are $27.95 each (including shipping); paperback copies are $18.95 each (including shipping. Make payment to Other World Books [address redacted].

The first-ever dictionary, with over one thousand entries, is a treasure of science fiction's most pospular [sic] words, names, characters, terms, expressions, and phrases. Roberta Rogow demystifies the argot of SF convention goesrs [sic] and fanzines, explain terms from literature, physics, astronomy, and aerospace, and defines these terms within the realm of science fiction. She also profiles writers, filmmakers, televsion [sic] shows, movies, and publishers and explores the lingo behind today's popular fantasy games.

The entry for slash fiction:

Not to be confused with slasher movies. When the slash is placed between the names of well-know male-bonded pairs, it indicates a degree of intimacy not usually fostered by most such buddies. Slash fiction is written mostly by women, to the intense disgust of many straight men and to the amusement of the gay community. The first objects of this peculiar form of literary affection were Star Trek's James T. Kirk and his loyal first officer, Mr. Spock. Later pairs included Starsky/Hutch and even Napoleon Solo/Ilya [sic] Kurakin, of The Man from U.N.C.L.E.. There is very little anyone can do to stop this sort of writing, short of confiscating every fanzine in which it is printed. Gene Roddenberry tried to stem the tide with a footnote in his novelization of Star Trek: The Motion Picture (1980 [sic]). George Lucas vented his irritation through his official fan club. Other actors, writers, and producers tend to shrug and laugh, realizing that the writers of this kind of fiction are a very small minority as compared with the great number of writers who concentrate on other areas of media fandom.

Librarian Rogow has put together an impressive reference book. The alphabetical listing includes terms and people related to fantasy and science fiction literature, film, television, and fandom; information on tangential media such as animation, gaming, and comics; and, best of all, science terminology and facts that come into play in fantasy and sf. There are flaws. The book is weak on comics, acknowledging only the commercial mainstream variety and doing so poorly. The entry for hobbits deals more with fandom's treatment of the race than with J.R.R. Tolkien's books. More significantly, all the people who get individual entries are men (no Ursula K. Le Guin? no Anne McCaffrey? no Andre Norton? no Mary Shelley?), an appalling oversight. However, this book will certainly interest people involved in any aspect of the genre and is recommended for subject collections. [2]