Fight Through The Fire 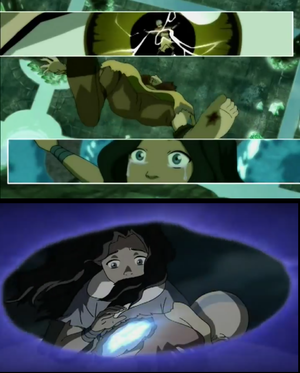 Two of the transitions used in the video

Fight Through The Fire is an AMV by Chaobunny for Avatar: The Last Airbender. It is set to the music "Breath" by Breaking Benjamin and features footage from Avatar seasons 1-3, with a particular emphasis on the third season. It was released in 2009, a year after the show ended.

The vid has been praised for its skilful editing and timing. It won Best in Show at the ConnectiCon 2009 Music Video Contest.[1]

The vid was originally named "Fight Through It All" and submitted to Anime Boston's AMV Contest, but it did not qualify due to the source material being an American cartoon instead of a Japanese anime.[2][3]

Wow... I pretty much almost cried tears of awesome, this is so amazing. I've been to cons, I've seen more amvs than I can count (and that's a lot... I can count pretty high), and I think that this is definitely one of the best, if not the best, I've ever seen. It's put together flawlessly, great song choice, and it's not overly flashy like some amvs. This is seriously incredible, great job.

I have to say, the second I saw this AMV at ConnectiCon, I started shedding tears...manly tears at how this was layed out. Simply brilliant!

I absolutely love this video! Well executed and kudos on the editing. Shots and scenes like this take a lot of time to do and for that I commend you! God it makes me want to watch more avatar!

I just wanted to comment how much I adore the editing in 2:18-2:20, the switch between Katara's two emotions with the beat. :)

Whoa, I didn't know this AMV could have gotten much better than the original! lol I could see a lot of new effects in there like masking. And congrats on getting best in show at the Connecticon 2009! :D

Wow!! This is phenomenal! You did wonderful with synchronizing it with the music. I love the effects and how it all stays intense. :)

I remember watching this AMV every night before bed. It's that amazing. I've watched a ton of AMVs over the years and this one is still my favorite. I always get chills at this part: 1:13 @_@ Been in the mood for AMVs again lately and I'm so glad this is still on Youtube!