Field of Screams is a Kirk/Spock story by T. Jonesy and Cordelia Naismith. 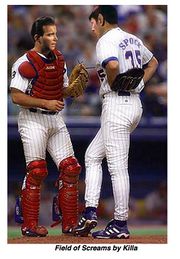 It was published in the print zine First Time #54.

"In order to decide which ship gets shoreleave on Wrigleyʼs, Kirk is charged with getting together a baseball team to beat the one from the other ship."

"Field of Screams" is ten pages. Since I despise baseball, I wouldn't have even read the story except that I had to read all the stories in the zine so I could vote in the contest and do it fairly. Unfortunately, my prejudice just didn't allow me to really enjoy the story. It was, however, very intricately plotted and will probably amuse someone who likes baseball. It is meant to be humorous, and I did like some of the jokes at times. And the ending was very nice. This was well thought out. But I still hate baseball and kept thinking that this story was really more fitting for Deep Space Nine than for the original series because that series had references to baseball in it. [2]

From the very first paraphrased verse of Ernest Thayer’s “Casey at the Bat” to the very last baseball cliché, this story is an absolute delight to read. In order to win shore leave on Wrigley’s Pleasure Planet for his crew, Kirk and company must win a baseball game. Their opponents are from the Hood, captained by a man named Jack Hunter, an old rival of Kirk’s from Starfleet Academy. The characterizations are perfect. This is the Spock I adore. He is not stupid, nor is he naïve, just endearingly out of his depth when dealing with human activities. As one of the authors said, “It’s a fish out-of-water story.” When he is unable to finish dressing in his baseball uniform because he doesn’t know what to do with the various accoutrements, (nope, not going to spoil it for you), I howled with laughter. Kirk, also, is just as I like to see him portrayed: concerned for his crew, a bit headstrong, devastatingly charming and oh, so protective of Spock. When Hunter deliberately pitches a fastball at the Vulcan’s head, Kirk charges the mound with a warning: “If that ball so much as touches air he’s inhaling, I’ll rip your head off and use it for batting practice.” Oh, yes. Spock follows with his own warning.

I am awed by these authors’ ability to write humorous K/S that doesn’t stretch characterization or denigrate the personalities of our heroes in search of an easy joke.

I’ve read this story several times, and it never fails to make me laugh and warm me up inside. Get the contest zine and read it yourself. I guarantee it will do the same for you. [3]

Humorous stories that are truly funny, well written, and with an interesting plot that also keep Kirk and Spock totally in character rather than exaggerate personality traits don’t come along that often in K/S fandom, yet in this zine we have two, one right after another. Field of Screams is the second story in the zine, and also one of my favorites. The fun starts right off the bat with the amusing title (er, bad pun here that I realized after I wrote this. I guess my subconscious mind was hard at work!) , and then the story opens and closes with very clever verses “inspired” by Ernest Thayer’s poem “Casey at the Bat”. In this story, Kirk and the Enterprise crew must win a baseball game against another starship in order to spend shore leave on the planet of their choice. Several practice games later (which are very amusingly described in the story) by “Kirk’s Kamikazes”, reveal just about what you’d expect—Kirk is good at baseball, and McCoy is terrible! One surprise for me in this story was Spock’s prowess at the game. After watching Leonard Nimoy’s awkward running scenes in some of the episodes, I would not have thought of Spock as a natural athlete. But the author makes it work in this story. Spock logically studies and analyzes the game and that, combined with his superior physical strength and knowledge of physics makes him a great pitcher and he also hits a home run every time at bat. Spock also gets a little assistance with his batting position from Kirk, and in the process both discover their feelings for each other are reciprocated. One of the funniest parts of the story is Spock’s distaste for the uniform. I found myself giggling madly as I envisioned Spock in a baseball uniform! Kirk finally persuades Spock to wear the entire uniform, and there is a hilarious section where Spock becomes increasingly hot, sweaty, and uncomfortable due to wearing the plastic cup. The author does a wonderful job describing all this, and has some great phrases such as Spock’s “sautéed scrotum” and “poached testicles”. Too funny! The game with the other starship does not end exactly as the Kamikazes (especially Spock!) would wish, but a surprise twist provides a fun, and funny, happy ending. Read it and enjoy! [4]

In this skillfully written, humorous tale, the officers of the Enterprise are all very much in character, despite the fact that they are in the unusual position (for them) of having to tackle a task for which they have neither the aptitude nor the training. Can they, against all odds, put together a winning baseball team? Or will they disappoint their captain and lose the game--along with an opportunity for that coveted shore leave on Wrigley’s? You’ll have to read the story to find out, but rest assured that you will be entertained, not only by the baseball part of the plot (which does not really require more than a passing familiarity with the game), but also by the K/S. I absolutely loved the moment when Kirk realizes how he feels about Spock. It just works perfectly and feels absolutely right, even though it occurs in an extremely unconventional setting. (Just wanted to also note that I thought the structure of the story worked very well: it’s broken up into short sections with titles such as “The Problem,” “The Locker Room,” and “First Practice.”) [5]

When I recently reread this entry from Robin’s contest zine, I enjoyed it every bit as much as I did the first time around. Thanks to its baseball jokes and delightfully humorous style, this was one of only a few contest stories for which I was able to guess the authors. And this story really makes me laugh! I guess it helps that I like baseball, but the story also has good writing and characterizations. The plot is silly enough to be funny, yet all the Enterprise crewmembers remain recognizable and true to character. When I first read this story, one stumbling block for me was that it reminded me of the DS 9 episode in which Cisco’s crew forms a baseball team. I don’t remember what was at stake in that contest, but some of those players were also pretty inept, and I kept picturing them instead of Sulu, Uhura, etc. This didn’t happen at all when I read the story a second time, however, which is maybe why it struck me even funnier than before. And make no mistake: the identities of Kirk and Spock are never in doubt. Despite its humor, the story’s theme is straightforward K/S—“K/S light,” if you will, but definitely a tale of Kirk and Spock beginning a physical relationship. The moment when Kirk says “I’ll kiss you later” is lovely. And there are so many funny and clever touches, as when Spock, who knows nothing about baseball, simply reads up on the rules and then programs the ship’s computer to select a talented team to oppose Kirk’s squad during practice. The bit about Scotty’s double vision reminded me of the Monty Python sketch about climbing Mount Kilimanjaro. And of course the whole situation of Spock’s difficulty with his...er...equipment was great. Thanks to the authors for a heck of a fun read. Play ball! [6]

I have to preface this review by saying that when the Sci Fi Channel first got the rights to broadcast TOS, in addition to having both Bill and Leonard introducing and commenting on each episode, they also interviewed the various producers and other people who worked behind the scenes. During one of those interviews, a producer commented about how humor was used in TOS. He said, "We were always careful never to go overboard when it came to getting a laugh. That is why we never dressed Kirk and Spock up in drag or had them slipping on banana peels. We always wanted to make sure that no matter what, we were careful to preserve the dignity of the characters." Now I don't know if either of these two authors ever saw this interview, but one thing is for sure—the way they handle the humor in this story makes me believe that they did. Although the joke is always on Spock in this tale, he still remains the same reserved, dignified Vulcan we all expect him to be and yet we are still able to laugh at everything these authors put him through without feeling the laughter is at his expense. And what made this story even more enjoyable for me is that amidst all the laughs, there are still a few "little moments" that make K/S stories so special to me. Great job, ladies! [7]

The Enterprise and the Hood both want shore leave on Wrigleys. Starfleet decides they can compete for this with a baseball game. The winner goes to Wrigleys, the loser to D'reggs Planet. This is a very clever and extremely funny first time story. The Enterprise is losing badly when Spock comes onto the field. Kirk looks at him and realises he is in love. Spock saves the day (being expert at everything he does) and Kirk ends up with his dream date on leave. Do not read this in public. I start laughing out loud every time. [8]

I'd heard of this story several years ago but only recently had the opportunity to read it, and I have to say that it lived up to expectations. Images of the adept Enterprise bridge crew floundering around on a baseball field was amusing and, somehow, appeared to fit, despite the seeming contradiction. McCoy carelessly swinging three weighted bats around, Sulu stopping to check the species of turf grass; Rand avoiding injury on a wild throw when the ball becomes stuck in her beehive hairdo.

And then there's Spock. His confusion over the game, the purpose of wearing garters over socks (there is none, other than tradition), the banana cup to protect 'the family jewels'. The baseball cap and tap shoes (aka cleats) which he flat-out refuses to wear...