FedConUSA was a disastrous 2008 procon in Dallas, Texas.

FedCon, a long-running German con had licensed their name to "FedConUSA," but discontinued their association with FedCon USA in January 2008.

This con is also not FenCon, sponsored by Dallas Future Society. 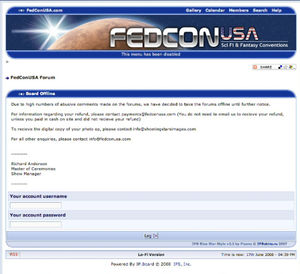 the forum displaying the message it had been purged/taken offline

The official forum was mostly purged by Tim Brazeal or associates on June 17, 2008 with the message: "Due to the high numbers of abusive comments made on the forums, we have decided to take the forums offline until further notice." See a screenshot here: Screenshot of the FedConUSA forum, Archived version

A fan responded to this with: "FedconUSA convention promoter Tim Brazeal has begun the impossible task of purging all incriminating evidence against him and his company by deleting the entire message board at FedconUSA. [snipped] I only wish the people who attended FedconUSA had picked somewhere other then the FedconUSA website to be ground zero for their angst. A website Tim Brazeal couldn’t remove." [1]

A remnant of that forum is here: FedConUSA Forum (Offical Forum for FedConUsa!), Archived version (a wayback link to an archived version, last update April 20, 2008).

See a video of the opening ceremony featuring storm troopers and John Billingsley trying to save the day: FedConUSA Opening Ceremony.

Posted 15 June 2007 - 08:22 AM FedCon is arguably the best Star Trek and sci-fi media convention on the planet. It is a professionally run convention, with the heart of a small convention. What this means is that every aspect of the convention is carefully constructed with one person in mind. You. TrekUnited is excited to announce that Dirk Bartholomew, owner of FedCon, and our own Tim Brazeal will be bringing FedCon's unique fan focused conventions to the USA.

FedConUSA aims to bring everything that makes FedCon so great to America, to remind both attendees and organisers what conventions are about. A convention should be a celebration of the genre, with workshops, panels, star guests, vendors, fan shows, costume and art contests, auctions, parties and of course the most important element of all, you. It should be fun and interesting, and you, as the paying attendee, should be free to interact with the guests throughout the convention, and the guests should feel free and comfortable to mix with attendees. This is FedCon, and this is FedConUSA.

Just to let you all know. Once we announce the dates for FedCon USA. We will need alot of people to help with the show. So if you are interested, please let us know. We already have around 20 or so volunteers but will need many more. Also, please be sure and check out http://fedcon.de when you get time. Dirk puts on one of the best conventions in the world which is why I decided to get involved with him.

As Co-Owner of FedCon USA, I will promise you that you as a fan will be treated with the utmost respect and attention that you deserve. Dirk (FedCon Germany) even after doing conventions for 16 years still very much keeps the fans in mind when running his conventions. His shows are not just a convention, but an experience and one that I want us all to have a chance to share in. Each and everytime I leave his shows, I always want it to last longer. He knows how to treat the fans and knows how to put on the best show in the world. I hope that you will all join us. Our first show here in the U.S. will be an experience to say the least.

Hope to see you all there once the date is announced..

This morning in Dallas, Texas, shortly after the start of the second day of the first ever FedCon USA, the show was cancelled. At 11:14 AM (Central Time), after the first Saturday guest (John Billingsley) finished his appearance, the show MC came out on stage announced that the convention was closed due to poor attendance.

“It’s Over” This morning the second day of Fedcon USA started off with John Billingsley (Phlox – Star Trek Enterprise) and his wife Bonita Freidericy (who guested on Enterprise) entertaining the crowd with thoughts and anecdotes on Star Trek Enterprise as well as jokes about Billingsley’s Enterprise cast mates. As their appearance was finishing up with Q&A, FedCon USA MC Richard Anderson came on stage and told the crowd “we have no choice but to cancel the remainder of the event." Billingsley and Friedericy stayed on stage after Anderson’s announcement and vowed to "stay until all questions are answered."

Anderson cited the lower-than-expected attendance, saying organizers "were hoping for people to show up" and again repeated "we have no choice." When asked if they would finish up with the planned guests for Saturday, Anderson said "It’s over as of 10 minutes ago." Anderson did say that convention goers would get a full refund. Those who bought their tickets at the event were able to get their refunds immediately but those who bought in advance were told they would get refunds "at a later date." Anderson noted that FedCon USA organizer and founder of Trek United Tim Brazeal (who was not at the event due to illness) would "go into personal debt" to pay back all attendees.

As of noon Saturday the main hall and the dealers room have been closed, but the autograph room remains open (and will stay open until 4PM). Some of the guests including Connor Trinneer (Trip Tucker – Enterprise), JG Hertzler (Martok – DS9) and Robert O’Reilly (Gowron – TNG & DS9) are in the autograph room signing for the fans. [4]