Faunch is a Star Trek: TOS explicit het zine. According to its editor via The Strekzine List, its content is "satire/sex, the sort of stuff most zines use for filler." It is a ditto zine.

The fans who created "Fauch" did so after reading Fascinating......but filthy!, a 1968 zine, something that is mentioned on the You Are Receiving This Zine Because page. "Fauch's" creators also wrote: "We were inspired so from reading a borrowed copy that we rushed out at wrote Faunch." [1]

Faunch 1 was published in June 1970 and contains 10 pages. There were 51 copies printed, and its original cost was thirty cents. 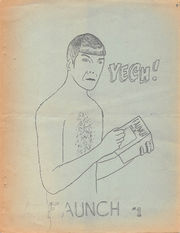 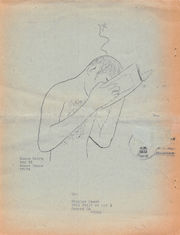 The Zine For Staunch Trekkies

Published just this once (we promise*) by the Pinkadiddle Press for people who like seks in their star treks. Price 30 cents: or two pictures of naked (semi?) Vulcans.

TABLE OF CONTENTS: Actually just a bunch of junk thrown together and those who weren't ashamed put their names on their work, so why bother?

Faunch 2 was published in 1971 and contains 14 pages. It has the subtitle: "Androxenophile" and was sometimes referred to as "Pentathlon, Androxenphile."