Father Figure is a gen Sentinel novel in two volumes by Amethyst. Both have color covers by Lorraine Brevig and interior illustrations by I. M. Mueller.

It was net-published before being collected as a zine.

In this novel, Jim and Blair have a domestic discipline relationship. 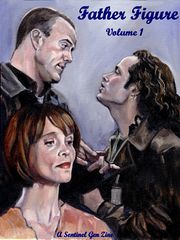 cover of issue #1, by Lorraine Brevig

Chapter One: First Contact -- Blair suffers an injury that affects his sense of security and control over his life.

Chapter Two: Promises, Promises -- Jim tries to protect a naïve Blair from a compromising situation – a number of rash promises are made.

Chapter Three: Error in Judgment -- Blair makes some bad decisions and pays the penalty for them according to Jim’s rules.

Chapter Seven: House Rules -- Together, Jim and Blair comprise a list of expected behaviors for our young, insecure anthropologist.

Chapter Eight: Blue Smoke -- A bomb threat at Rainer and a dangerous health problem for Blair.

Chapter Nine: Rule Number Seven -- Grounded for the first time in his life, Blair has a little trouble adjusting.

Chapter Ten: Stolen Heart -- Kidnapped and held hostage, Blair is a pawn in a deadly covert ops mission Jim holds the key to.

Chapter Eleven: Adventures in Blairsitting -- Simon takes over the role of temporary babysitter to a still ground Blair when Jim is called out of town.

Chapter Twelve: Happy Birthday, Baby - Naomi visits, Blair has a birthday – just not the one he thought he was going to have – a trip to Mexico, a kidnapping, a rescue, a covert ops, Burke and his men, mysticism, Jim angst, Blair owies and secrets revealed.

Chapter Thirteen: One Moment in Time -- Jim’s thoughts on the trip back home from Mexico.

Chapter Fourteen: Corner Time, Curfews and Comfort -- Confused and upset over recently reveled secrets, Blair acts out and pays the piper … or should I say the Sentinel.

Chapter Fifteen: I Don’t Think So -- Some of Carolyn’s thoughts on fatherhood.

Chapter Sixteen: Solid Ground -- Naomi’s past deeds bring out some of Blair’s insecurities and threaten his health while Jim and the detectives of MC try to find a ritual serial killer. 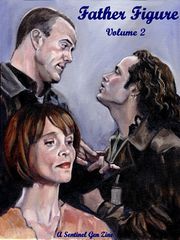 cover of issue #2, by Lorraine Brevig

Chapter Seventeen: Jammies and Jimbear -- The parental woes of chicken pox. Blair reveals some childhood tales and the tension between Jim and Naomi escalates.

Chapter Eighteen: Suffer the Little Children -- A man from Jim and Simon’s past resurfaces, making Blair and Daryl his next targets for his perverted pleasures. (Warning: Contains scenes of molestation.)

Chapter Nineteen: Where Have All the Heroes Gone -- Jim disappears and Blair is left in the tender care of his extended family while they search for the missing sentinel with the help of Daniel Burke and his black ops crew. New facts about Blair’s upbringing emerge at the least convenient time.

Chapter Twenty: Who’s Been Naughty and Who’s Been Nice -- A simple task of writing a letter to Santa.

Chapter Twenty-One: Unto You a Child is Born -- Sometimes the offer of a unexpected gift graces both the receiver and the sender. Naomi visits.

Chapter Twenty-Two: The Teenage Years or Why Sentinels have Receding Hairlines -- A tragic accident leads to major misunderstandings, leading Blair into a downward spiral of destructive behavior. (Warning: Death of Minor Character.)

Chapter Twenty-Three: Birds of a Feather -- Jim does a favor for Burke. What could be simpler? One Problem Child plus one Problem Child makes for PC squared, not doubled.

Chapter Twenty-Four: Doing Time -- A good deed results in some bad times at home for Blair.

Chapter Twenty-Five: Taboo, Tattoo -- An experiment with body art has some drastic and unexpected consequences.