From Fanlore
(Redirected from Fantastic Journal)
Jump to: navigation, search

The Fantastic Journal 1 was published in 1978 and contains 121 pages. 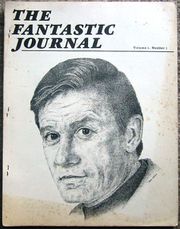 cover of issue #1, Roddy McDowell is on the front

'Fantastic Journal' is a dream of the editors, Barbara Jackson and Carolyn Fulton. They have created a universe which, while a logical outgrowth of the TV show, far surpasses it in depth of characterization, internal consistency, and quality of story content. Moreover, the stories are quite well-written. While still in need of some publishing, the authors' work flows smoothly. A slight over-dependency on adjective, adverbs, and qualifiers can be easily remedied. What is important is that their stories are well-plotted, believable, and interesting. They do not sacrifice plot to concentrate on 'relationships.' but are content to let the interpersonal content arise naturally for the story line (K-Sers please note!) The cover illo by Nan Lewis is a magnificent portrait of Roddy McDowall, one of the stars. Interior artwork is minimal, and confined to excellent caricatures. Additional artwork would certainly enhance the visual impact of 'Fantastic Journal,' but at least we aren't subjected to a superfluity of inferior pieces. Interior graphics could be improves; in several cases, too large type face is chosen for the title and such, and the typewritten pieces following are overshadowed. The stories are, for the most part, excellent examples of extrapolating from given facts to arrive at a cohesive background for your characters. 'Skybird,' 'Moonlight and Ashes,' and 'Moment of Surrender,' background Varian and Willoway, two of the more important of the marooned travelers. The others are not highlighted separately, but they do receive better treatment from Jackson and Fulton than the TV program. The result is believable characters one cares about. [1]

The Fantastic Journal 2 was published in 1979 and contains 135 pages. 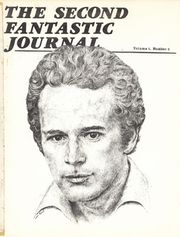 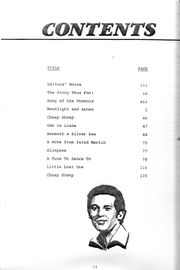 In the flyer for the first issue, the editor explains why this second issue was going to be late: they had massive problems with a nefarious, lying, cheat of a printer regarding rebuilt and rented mimeo equipment. "In words, WE HAVE BEEN HAD!!. For $1,669.98. If we had just wanted to get the thing out of the way, we could have gone ahead and printed the Journal -- It would have been very much like this flyer. But if you happened to see a copy of our first issue, you can see where we just wouldn't want to do that. So please, have patience. The Second Fantastic Journal will be printed as soon as we are able to get our money back from Gold Seal Duplicating, and rent comparable equipment straight from Gestetner."

Fantastic Journal 8 was published in 1978 or before.

FANTASTIC JOURNEY was a show I never watched. I tuned in once for five minutes, when I caught Roddy McDowall 1n a gold lame tie, said "Ho-kay," and switched to Hogan's Heroes. Well, reading this zine I confess that may have been a rash move. Editors (and writers) Carolyn Fulton and Barbara and Richard Jackson have wrought entertainingly and well. There are a couple of off-the-subject poems by Jakubjan-sky and Fielder, plus a trekkish (Kevin O'Reilly) cover by Nan Lewis to suck in the unsuspecting, but from there on the zine is totally about the travels and travails of the Kid, Doc, and McDowall.

In order, Barbara Jackson's "Skybird" is a gentle character study of the futureman of the crew, Varian; "Wild Night at Plymouth Rock" by Jackson and Fulton, a rather silly tour de force in the style of every last April-Fool-on-the-Enterprise story you've ever hated; "With Apologies" by Richard Jackson, the only hand -lettered story (non-comic strip) ever seen in a fanzine-rand incidentally, damn funny. Fulton's and Jackson's "Moment of Surrender" depicts reasonably well how several of the crew come to trust Varian, who comes across as a rather more lively Questor, but it is not finally compelling. "Moon- light and Ashes" on the other hand is superb, a fine, mature, credible story about the life of Jonathon Willow by (McDowall). Fulton is a writer to watch, for this 58 page Part One is pro-qua1ity--Ladies ' Home Journal, perhaps, but pro.