This article is about the glossary term. For other uses, see Fansplaining.

Fansplaining is a word with several meanings.

It is a play-on-words with "mansplaining" and a number of other "splaining" terms.

Outside Media Usually Getting It Wrong 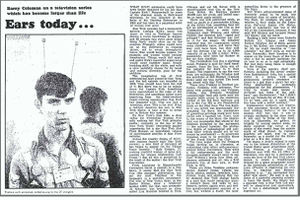 Caption for this negative and mocking 1976 article from the UK paper, "The Guardian," "Trekkie with antennae; embarrassing to the SF straights," an example of the worst of mundane and fansplaining reporting about fans.

It is used by some fans to describe the often clumsy and not very knowledgeable articles, usually by reporters and bloggers, written to explain fandom and fanworks to a mainstream audience. There are many examples of these fansplained articles at Category:News Media. Some academic articles also fall into this category. See Category:Academic Commentaries.

In a 2007 discussion about the proposals to create Organization for Transformative Works and Archive of Our Own, a fan posted:

FF.net is where just about every journalist "researching" the next article on fan fiction writers, aka "who are these weird people?", starts his or her enquiries. Unfortunately, because of the limited time they have for said research, it is also often as far as they get. Which is a shame, because though there is excellent stuff on that site you have to wade through an enormous amount of dross to find it. Many journalists, I fear, give up before getting anywhere near the good stuff. [1]

In 2015, a fan asked: "Do fans have a phrase or word that describes these clueless press articles meant to amaze the clueless, the “oh my goodness, can you believe there is such a thing as fan fiction out there?” sort of thing journalists have been writing for decades? It seems like these articles get a little more sophisticated centimeter by centimeter (and there are a handful of good ones out there), but they mainly are hammered out via template. There must be a fannish word for these wide-eyed, look-it things." Some responses were: "mugglesplaining," “Come, let’s visit the zoo!”, "Maybe we should coin it “pressplaining” since “fuckwittery” is a littie vague?" [2]

Other Fans Getting It Wrong

Fansplaining can also be employed by fans complaining about outside fans' comments about fandoms they are not involved in. From a fan in 2011:

The term Mansplaining has generally fallen into the common Internet lexicon. Mansplaining is when a man explains something to a woman, preferably about a female issues, as if he is a far greater authority about the issue. While nowhere near as weighty a faux pas of ignorance and presumption I have noticed a similar trend thanks to the recent Starfire and Catwoman controversy in the DC reboot. This practice of Fansplaining is a term I have coined who when people make bold statements about an entire fandom that they have little to no knowledge about.... I think we have all fansplained something about another hobby at some point it time. Let me Fansplain something to you., Archived version October 5, 2011 </ref>

Fans Hopefully Getting It Right

Fansplaining can also be used by fans who want to explain an aspect of fandom to others, either fans or a more general audience.

One example of this use: the series of interviews at Fansplaining.

Related to Hand Waving: using fansplaining to cover poor writing or leaps of logic in fanworks.

Some Additional Examples of Use