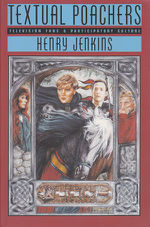 Textual Poachers: Television Fans and Participatory Culture is a non-fiction book written by aca-fan Henry Jenkins and originally published in 1992.

It was massively influential in the development of fan studies and coincidentally introduced many new fans to media fandom. The book was unusual for its time in that it celebrated fandom instead of pathologizing it.

The book's focus is on media fans as an "interpretive community" that "poaches" media texts in order to subvert their intended meaning and reclaim ownership of popular culture from massive corporate interests. In Jenkins' words, the book "documents a group insistent on making meaning from materials others have characterized as trivial and worthless."