Fanfoodery or the plain fans guide to eating

Fanfoodery or the plain fans guide to eating is a zine edited by Eve and John Harvey for the con Conspiracy '87, the 1987 World SF Convention 27 August to 1 September, Brighton, Great Britain. 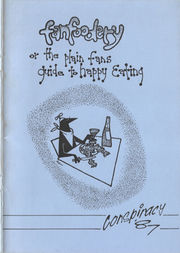 It is a collection of recipes submitted by fans along with short essays about food, fandom, conventions, memories of past events, and explanations of many fan traditions.

Food and drink are a cornerstone of fannish life. Yet neither seem to get the attention in fannish literature that they deserve. The mundane world abounds with cookery books and volumes on drink, yet it is rare to find sf fans writing on these subjects. There have been a few notable exceptions, but none which have had a wide distribution.

This publication attempts to correct that imbalance by being entirely devoted to the gastronomic arts. Now, if any of you are asking the obvious question, "but what connection has food with SF?", may I draw your attention to Dave Wood's contribution, which closes this publication. Read this and never again will you doubt that without Golden Syrup there could have been no Golden Age of SF; Space Opera just wouldn't work without ice cream in the intervals and the moon would still be made of green cheese if we hadn't eaten it.

This book is more than a collection of recipes, although there are plenty of those. Here, the world of the SF fan can be viewed through a cocktail glass or the prongs of a fork. So get out your frying pan, light the gas and let's cook up some Fanfoodery.

From "Cooking in a Hotel Room"

Eating irons and plates are easy enough to lay your hands on in a hotel, and I don't see how it can be stealing if you don't take them home with you.

I have to admit that I didn't cook [Chow Mein a la Mexicon] at Mexicon II, in fact I've never cooked it at all, having only just invented it, but I see no reason at all why it shouldn't work, and it ought to be slightly better than the average hotel "cheap meal", and less than half the price. But Hexicon II was the scene of my greatest feat so far of hotel-room cuisine; heating up a sealed tinfoil pack of Boots Vegetarian Lasagne in a wastepaper bin full of hot water, insulated by towels and heated by the radiator, as above. Since the water is just off the boil, it seems sensible to allow a rather longer heating time than that given on the packet. Unfortunately, after all that, the lasagne was pretty vile, all TVP. I'm not a veggie, and can't see the point of veggie food which is full of imitation meat.

Pot noodles are now considered deeply naff, but are a fair accompaniment to boil-in-the-bag stew or curry - though personally I prefer Smash. Instant soup is ok, and instant custard over tinned fruit not bad. Certain vile creatures spend whole cons on a diet of cold baked beans; give me HSS Three Bean Salad or tinned ratatouille any time. I've never yet seen a con hotel with electric fires, but if you happen to find one, the traditional Oxford paper-clip toaster is worth a try. (Twist straightened-out paper-clips round the fire's grille, to form prongs on which to spear bread or crumpets. Or steaks? Catch any drips on a tray.)

We were discussing all this in Phil Palmer's room at Mexicon II, when people started casting interested glances at the trouser-press. Either Anne Hamill or Nick Lowe came up with the notion of using it to cook frozen pizzas. I don't think anyone tried it, and as a committee member, I'm secretly rather relieved.

For a short span of time at the end of the 1970's and beginning of the 1980's there was a popular fannish drink known as a Spayed Gerbil. Popular, that is, in a less-than-household-word sense. Articles were written about it, and differing histories of the interesting concoction were written and argued about. Fanzines talked about it, name-badges were drawn that referenced it, there was even a squib on it written for the legendary Fancyclopedia III. Spayed Gerbils were ordered at many midwestern US conventions and a fellow aficionado once had a beautiful candle made up in the form of a spayed gerbil, complete with operation scar, all requisite rodent features and an armful of fanzines on display.

Despite what certain members of SFWA may claim, the real Spayed Gerbil was originally created and ordered at a CHAMBANACON in 1976 Credit for the recipe itself goes to Joe Haldeman while I was the first person to actually order and consume one. The idea itself came from Andy Offutt who suggested most bar staff would pretend to know what you were talking about even if you ordered something outre like "a Spayed Gerbil". To his credit, though, the bartender who took the order admitted he hadn't a clue what we were talking about so I turned to Joe who turned up the recipe. Several other adventurous souls followed my lead and for the rest of the weekend each bartender passed the recipe on to the next crew so the supply flowed steadily.

The Spayed Gerbil is not to everybody's taste. Although I quite like them myself I've often described them as "the perfect fannish drink; you can leave it on a table in the bar surrounded by thirsty fans while you take a break and when you return nobody will have touched a drop of it!" Still, there developed a small but determined core of fannish imbibers who would regularly order the drink and a few who tried to create variants on the original. Of those, only the Spayed Glicksohn ever caused repeat orders and the less said of that the better...

Of interest was that despite the strenuous efforts of Ben Zuhl, high-priest of Spayed Gerbil Fandom, to make the drink a modern fannish myth after about five years the idea more or less petered out, demonstrating, I suppose, that mere alcohol alone is insufficient to touch the core of whatever acts as fandom's legend-generating mechanism.

I order the occasional Gerbil, for old times' sake but I suspect I'm like the fannish dinosaurs who rue the passing of hekto jelly. But if you're feeling sorry for an old fan and tired whose day has gone and whose chance for fame has passed him by, take me into a bar at the Metropole and ask the server there for two Spayed Gerbils. And when he or she stares at you in bewilderment, sniff derisively and say, "One part campari, three parts gin, stirred not shaken over ice and served up with a twist of lemon."

I'll finish yours for you because you probably won't like it.

From "Hot Stuff in the Night"

There are two activities which characterise British Fandom at conventions; the first is a single-minded urge to drink the hotel bar dry, and the second is to

gather in large groups to go out in search of a late night curry. Most convention organisers cater for the first of these, but so far only the late-lamented Silicon has ever managed to arrange a curry eating programme item. The Great Paki Pig-In. Newcastle-upon-Tyne was blessed with a restaurant, located over a warehouse, which specialised in providing eat-as-much-as-you- can buffet-style banquet for an all-in price. Thus the whole convention would relocate to this haven and try to eat the place dry!

From "The Chili That Stopped Rich Cold"

My cooking is notoriously awful. However, since fannish socializing does seem to frequently revolve around food, over the years I have come up with a few passable stand-by recipes. Well, I can't really call them recipes, since I tend to cook according to mood and what's available, but the following are meals that have drawn compliments over the years.

This came about because I was having a collating party and thought it only fair that I should feed people after they were nice enough to put the covers for my favourite fanzine on backward. I prepared the chilli the day before the party and that's when Rich, who was then my flatmate, came along for a taste. "Too bland," he said, "should be much hotter". I'd already depleted my supply of chilli powder so, in desperation, emptied the entire contents of a 2 oz jar of tabasco sauce into the chilli. The result brought tears to Rich's eyes. He also ate three bowls and didn't speak to me again for two weeks. The recipe has been refined over the 10 years or so since that first attempt, and has been served at many fannish gatherings, with much success.

This will feed about 10 very hungry fans, or 20 polite ones.

From "Recipes for Room Parties"

The following recipes are ideal for room parties (or any other types of party for that matter) because they are bit-sized and not too crumbly or squidgy. However beware if Bob Shaw is one of your guests as they do horrible things to his diet. I regularly make them for parties or just for taking to conventions to fill the gap between breakfasts.

The sausage roll recipe is almost infinitely variable, the only limit being one's ingenuity, but they still are quick and easy to make. The Mexican wedding cakes (ideal for Mexicons!) keep well, even in a hot hotel room, as long as they are locked away from people like Mike. Anyway, here are the recipes themselves, I give a rough translation for American fans, although my American is a bit rusty.