From Fanlore
(Redirected from FanFix)
Jump to: navigation, search

Fanfix: the Star Wars Fan Fiction Library was a fan fiction archive for Star Wars fan writers. It accepted fan fiction from both the original Star Wars movies as well as The Phantom Menace prequels. In 1997, the archive was listed among the 'Top 10 Star Wars Fan Sites.' [1] 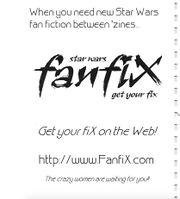 a 2000 print flyer for the web archive: "When you need new Star Wars fan fiction between 'zines...Star Wars fanfix -- get your fix -- Get your fix on the Web! The crazy women are waiting for you!!"

In 2003, the company hosting the archive went down and data was lost. The site was partially restored until it went down for good in late 2003. [2] Some of the missing content can be found in earlier versions of the website stored on the Internet Archive here.

Wombat, one of the co-archivists, gives an account of what happened in The death of FanfiX.com.

For years, FanfiX.com was the fanfic archive for Star Wars fandom. The archive started in the late 90’s and was officially dubbed FanfiX.com with the domain purchase in 1997. And then, in 2003, it vanished, and people have been intermittently asking about it ever since. Wombat, one of the site archivists, gives her account.

While FanfiX could never completely archive all Star Wars fic online, particularly after the fandom explosion with TPM in 1999 and the growing popularity of self-upload archives like FanFiction.net during that same period, the loss was a striking blow to the SW fanfic community. Yes, you can still access it via the WayBack Machine, but the possibility was there for a central touchstone for the SW fanfic community.

Are all-encompassing archives like FanFiX or The Gossamer Project practical anymore? Are they even possible? Do we need them? Sometimes I wonder… [3]

A reply by the site owner five years later:

Fanfix went down when I broke my neck in a car accident and lost the domain name. I recently got it back….. miss all of you.. wombat if your still out there drop me a line :) Deborah [4]

Stories were assigned to the following categories: 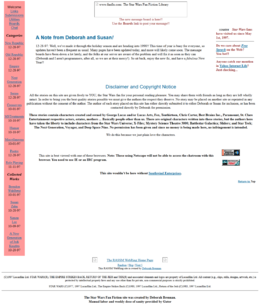 If you're Interested In reading the latest Star Wars fiction but don't want to wait for a fanzine to fulfill your needs, why not point your browser to http://www.fanflx.com, a site dedicated to Star Wars fan fiction. The whole gamut of tastes Is here, from Imperial to Rebel, New Hope, post-Jedi and just about every conceivable time frame in between. And the writing is excellent as well and varied. You can even have your own work submitted to the site. I tend to download a couple of stories and take them away to read at a leisure at home. [5]

I miss Fanfix.com! I went to fanfiction.net around the same time I signed up at fanfix, but fanfix was Star Wars! It was my life blood! I remember getting so excited that my fanfiction was going to be published there. On fanfix.com!!!

It's nice to be able to see the site on the way back machine... I even found my old fanfiction!

Yay for Mara Jade Skywalker and an email address served by Dark Horse and stopped without comment... :) [6]

Fanfix was my favorite fic site and I miss it still. The rumors had been that Lucasfilm had ordered it removed. [7]