Family Secrets is a 174-page slash Sentinel novel by Serena. The art is by TACS. 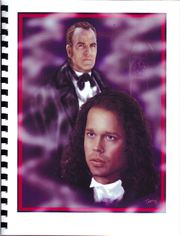 It was first published by AMC Press in 1999. In 2018, it was reissued in print and PDF by Requiem Publications.

From the distributor: "A wealthy heir is thrown into an asylum by his wife and her scheming cohort. Professor Sandburg, realizing what the man’s problem may be, has to kidnap the heir to save him. Murder, exotic animals, blackmail. All the good things in a romance novel."

From a publisher's flyer: "AU novel that takes place in England and the end of the 19th century. A wealthy heir is thrown into the asylum of Bedlam, diagnosed with brain fever by his calculating wife and her doctor. Only Professor Sandburg from Cambridge University understands the man's problem but he has to kidnap the man first. Follow their adventures with murder, exotic, poisonous animals, blackmail and more."

The illustrations in Serena's three, the last one being Reign of Terror were very nice, even if Blair was a little too pretty for my taste. I don't know what sort of technique was used to fashion the illoes, but it's a cross between an actual picture and a drawing (hey, I'm *so* not an artist so I have no idea). The zines themselves -- I *wanted* to like them. I'm a fan of Sir AC Doyle and I thought a turn of the century Jim-sleuth AU, along the lines of a Holmes adventure, would be interesting and fun to read. But the stories really didn't go anywhere. It was a good premise but the content was weak. I wish someone would take this premise and run with it, though. [1]