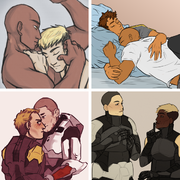 Different interpretations of the same characters[1]

Facecanon is a term predominantly used in the Red vs. Blue fandom to refer to fans' ideas of what certain characters whose faces are always obscured in canon look like. Since the characters' appearance is neither shown nor described in canon, fans have to rely on tiny details or invent faces for the characters wholesale. The various interpretations may differ from artist to artist but fanon generally settles on certain recognizable features that get adopted by the majority of fans.

The word is a play on headcanon and can be similarly idiosyncratic, though the Red vs. Blue fandom is surprisingly laid-back about different interpretations.