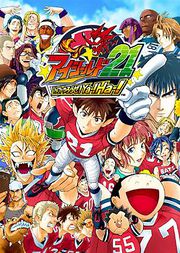 Eyeshield 21 is a manga about American football written by Inagaki Riichirō (稲垣 理一郎) and illustarted by Murata Yūsuke (村田 雄介). The series has been adapted into an anime, several video games, and a trading card game. The manga was serialized in Shueisha's Weekly Shōnen Jump, and is published by Viz in English. [1]

The manga follows the adventures of the Kobayakawa Sena (小早川 瀬那) and his teammates on the American football team, The Deimon Devil Bats. This misfit team dreams of playing together at the Christmas Bowl, and the manga follows the team's struggles and triumphs as they work towards their goal. While the Sena (the titular Eyeshield 21) and his teammates are the primary focus of the story, many friends and rivals appear throughout the course of the series.

ES21 fandom is small, although relatively active for it's size. It is, however, ineligible for the rare fandom exchange Yuletide as of 2011. Popular pairings include Hiruma/Sena, and Hiruma/Mamori.

There is some claim that, over it's seven year run, ES21 had an influence on the popularity of American football in Japan. [2]

Witness the popularity of Eyeshield 21, which ran for seven years as a manga and three as an anime. Its influence has driven the popularity of its sport, as people have claimed that the number of Japanese kids playing American football doubled between 2002 and 2006, with the manga selling 16 million books for its first 25 volumes. [3]