Everything is a K/S story by Dana Austin Marsh. The art is by Deeb. 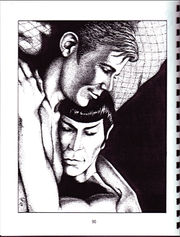 inside art from issue #16, Deeb -- "Gosh, I can look at lovely K/S art forever.... This illo is truly gorgeous! I wish I owned the original sketch. I'ts a close up view of K&S in bed; Spock's head resting on Kirk's chest, their arms holding one another, faces content in the moment. And there is the slightest smile on Kirk's face that I adore. Deeb is one of the best!" [1]

It was published in the print zine As I Do Thee #16.

"At the end of the first five-year mission, the captain of the ENTERPRISE makes some highly unusual plans for his three-month shore leave... plans which leave him feeling worse than ever about his unspoken love for his Vulcan friend."

I liked the consistent, gentle, bittersweet tone of this very much. There was a good buildup of suspense in that every time one of my mental questions was answered, I came up with a few more to keep me interested. The climax may have been a bit bland -- and ordinary — but I was hooked all the way through. I usually skip sex scenes these days, but this one was so carefully told — with a different mixture of adjectives and metaphors -- that I was thoroughly absorbed by its gentle warmth and compassion... I would have enjoyed some details about Spock's injury, but I don't think such was necessary to the story. Finally, the very first paragraph had too many pronouns (he, his, etc.), which is easy for me to notice because I've been guilty of the same problem myself. All in all, the author's usual solid story. [2]

I certainly liked the premise of this: the illusion with which it began and the way it evolved. It was difficult for me to accept Spock's adamant pronouncement that he could not accept a ground posting. Not for Kirk? The decisiveness of both men's aoves during the chess match were much more in character. [3]

"Oh, no!", I thought, "a domestic scene!" (Actually, I kinda like 'em). A very tranquil, "Honey, I'm home" kind of thing emerges at the beginning of this story. Kirk as a satisfied Starbase Operations Chief, Spock as a satisfied domesticated mate, no conflicts, no angst, some nice sex.

Boom! It's gone. A prolonged illusion courtesy the Shore Leave Planet at the special request of one JTK. And he's so sad and empty as he leaves Spock's bed for the last time and walks away, his back to the fading scene. This was exceptionally well set-up. Truly unexpected.

Ifs the end of the first five year mission and the next is about to begin. Kirk's spent his entire 3 month leave "with Spock" only to be totally bereaved when his manufactured interlude ends.

Spock has spent his own leave on Vulcan— presumably to find a wife. But what he finds is that his true and onjy love awaits him at "home" on the Enterprise. This is a very well-told story that brings freshness to a familiar plot. [4]