Enterprise Lost is a Star Trek: TOS 199-page novel written by Steve Wilson. It is a sister zine to Enterprise Regained. 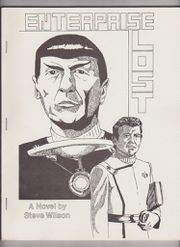 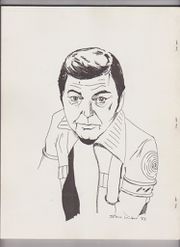 In the parallel universe of "Enterprise Regained," Saavik journeys to the Guardian of Forever and learn that her reality was never meant to be. The Guardian has selected her to be the agent of her universe's destruction. By making alterations in the time stream, she must make it possible for Spock to live. In so doing, she must also knowingly cause the death of her beloved David Marcus.

James T. Kirk and his friends have climbed the stops of Mr. Seleya. They have restored Captain Spock -- mind and body -- to life; but doing so has cost them the USS Enterprise and the life of David Marcus, Kirk's son.

But there is another universe; and there, on an Enterprise which has begun again to go where no man has gone before, Kirk, and his crew have begun to pick up the pieces of their lives after the death of their friend. Admiral Kirk and his new crew—First Officer Uhura, Drs. McCoy and Chapel, Chekov, Scotty, Saavik and Chief Helmsman Metcalfe—have passed their baptism by fire. Together, they have fought off an alien intelligence which nearly destroyed Jim Kirk's mind. Each one has regained the confidence lost since their first five-year mission; and Saavik has learned her most important lesson in dealing with human beings—she has discovered the meaning of love.

And yet, all is not well. At Saavik's insistence, the Enterprise takes a trip to the Guardian of Forever. There, she has discovered something crucial to the safety of two universes; but she will not tell Kirk what it is. Soon, she and Helmsman Metcalfe disappear, and signs of a conspiracy begin to surface among the crew. Jim Kirk finds he may not be able to stop whatever it is Saavik is planning. Worse, he doesn't know if he should...